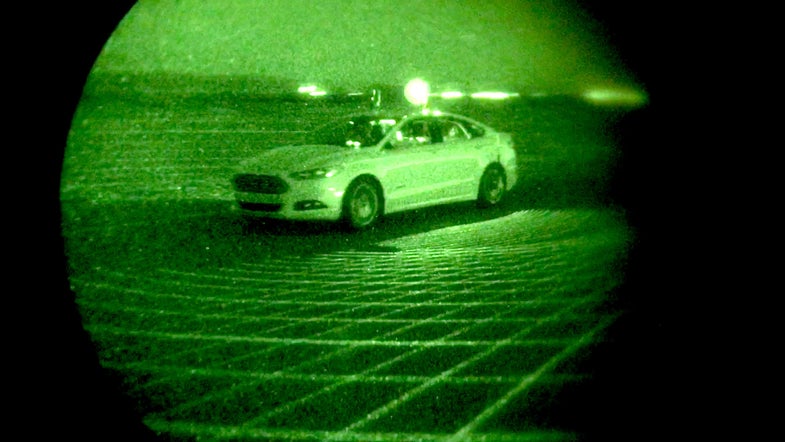 Ford researchers took a Fusion Hybrid autonomous test vehicle to its proving grounds in Arizona to put its LIDAR sensors through their paces – in pitch black darkness. No headlights, no streetlights. It was so dark the researchers who were monitoring the test wore night vision goggles.

The test was important not just for the cool factor of driving without lights in the darkness like a sci-fi spy. Many autonomous car systems use several types of sensors, including cameras and radar in addition to LIDAR. The trouble is, cameras require light and a clear field of view to see anything. Even in the daytime, snow covering lane markers or dense fog will confound cameras.

LIDAR uses laser light to detect objects, while radar uses radio waves. Both types of sensors can detect size, shape, and movement, but LIDAR is more precise. Since they’re both bouncing signals off objects in the environment rather than relying on light, they both work in the dark, unlike cameras.

Ford noted that having all three types of sensors on board is the ideal, but this experiment proves the utility of LIDAR in autonomous driving when conditions are less than ideal. The Fusion Hybrid test car used its LIDAR sensors to place itself in real time on 3D maps of the proving ground. The maps included more than just the road; the signage, surrounding geography, landmarks, and even trees were represented so the car could better position itself.

While the researchers inside the car saw only darkness around them, researchers outside were treated to a little laser light show through their night vision goggles. They could see the grid of laser beams around the vehicle (you can see the grid in the image above). Ford also announced this week that their autonomous vehicle program will use Velodyne’s Ultra Puck LIDAR, which packs 360-degree 3D mapping abilities and a 200-meter range into a little black puck-sized package made specifically for automotive applications.

The car was closely monitored, but it was the middle of the night in the desert at a Ford test facility, the perfect situation for really seeing how the car would do. Although the test car has a typical front seat with steering wheel and pedals, no one operated them. In a press release, Ford engineer Wayne Williams said, “As I rode in the back seat, I was following the car’s progression in real time using computer monitoring. Sure enough, it stayed precisely on track along those winding roads.”