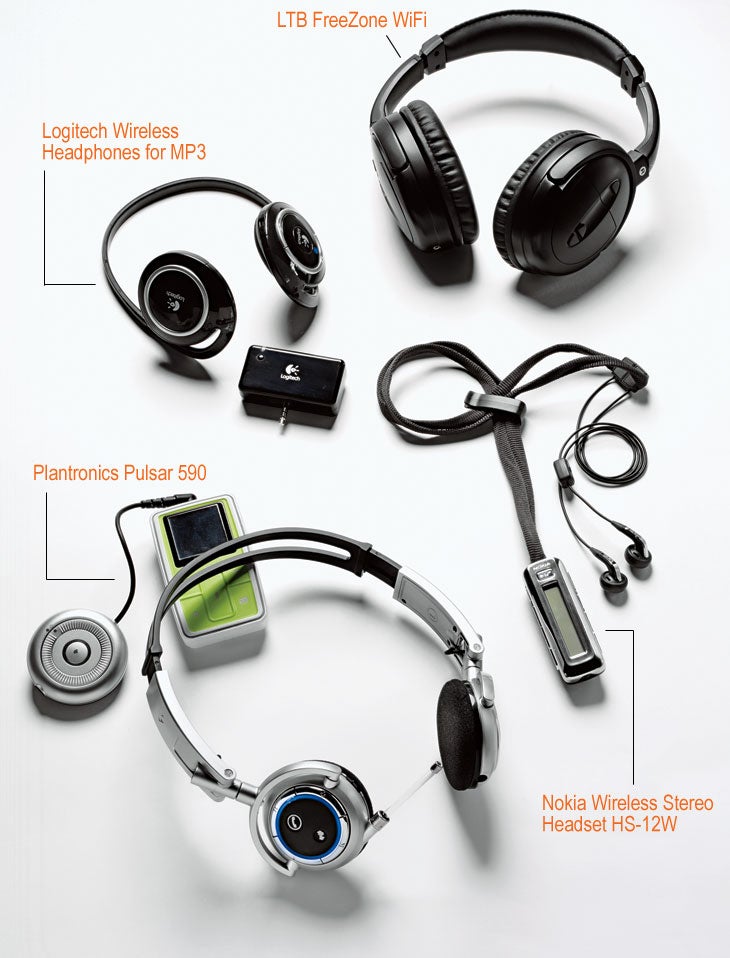 It’s a brave new wireless world, yet most portable-audio hounds are still tangled up in headphone cords. Soon, though, you’ll have lots of wireless stereo headphones to choose from. The technology isn’t brand new, but until recently it was too bulky and expensive to shove into the tiny, splurge-worthy gadgets we love. Expect to see three flavors of wireless earmuffs-Bluetooth, Wi-Fi and magnetic induction [see sidebar below]-rolling out between now and early next year. These airy headphones will connect wirelessly to audio players, mobile phones, laptops, stereo systems and game consoles for unencumbered musical bliss.

Plug the Bluetooth adapter into your audio player, then press a single button to switch between stereo audio and your Bluetooth phone. Hide the telescoping mic when you don’t need it. Works with A2DP laptops.

Range: Up to 100 feet, depending on device

For now, these earmuff-style cans are best suited for listening to music on your computer. There is only one Wi-Fi player, the SoniqCast Aireo, currently available, but rumor has it that Samsung and other manufacturers will release Wi-Fi-enabled players that automatically move music wirelessly from PC to player, or player to player.

Battery life: 8 hours (listening); 200 hours (standby) Nokia’s earbuds work with Bluetooth-enabled mobile phones that can store music. Stash your phone in a pocket or bag, and use a single button to instantly switch between tunes and incoming calls. A control box on the lanyard contains an FM radio and an LCD screen with caller ID.

Unlike Bluetooth and Wi-Fi, magnetic induction does not transmit data via radio frequencies, which propagate indiscriminately beyond the headphone´s range. Instead it encodes the audio in a weak magnetic field. Because each magnetic bubble extends only six feet around the transmitter, there is essentially zero interference from other devices using the same signal protocol. Technology developer Aura Communications (auracomm.com) boasts of power-consumption, cost and security advantages as well. Consumer-electronics companies, including Creative Labs, have shown prototype magnetic-induction players. Some could hit shelves by year´s end.