In a decade, your wristwatch will be thousands of times as accurate as it is today 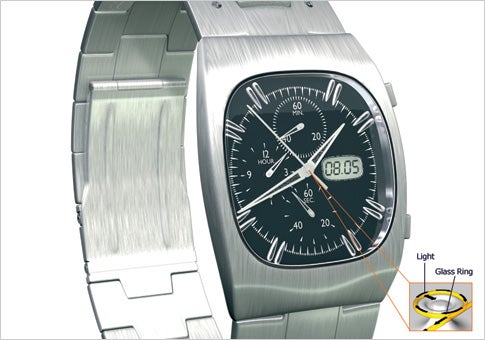 This watch’s light-powered drive mechanism vibrates thousands of times as fast as quartz.

This optical clock technology, developed at the California Institute of Tech- nology, could make the most accurate watch available now seem as retrograde as a sundial. A laser pumps photons around the rim of a microscopic glass ring, causing it to swell and contract 80 million times per second. This vibration could regulate the precision movement of a motor, driving a gear train that turns the hands.

The first mechanical wristwatch as accurate as quartz.

One of the first watches that automatically syncs itself with atomic clocks worldwide.

Most atomic watches sync with the U.S. clock in Colorado, which is accurate to one second every 60 million years. The Mega 1000’s internal antenna, however, can also pick up signals transmitted from observatories in Germany and Japan, so it’ll work most anywhere.
Each night the watch detects the nearest signal and sets the quartz movement to the local time zone-preprogrammed by the wearer.
$270; junghansusa.com