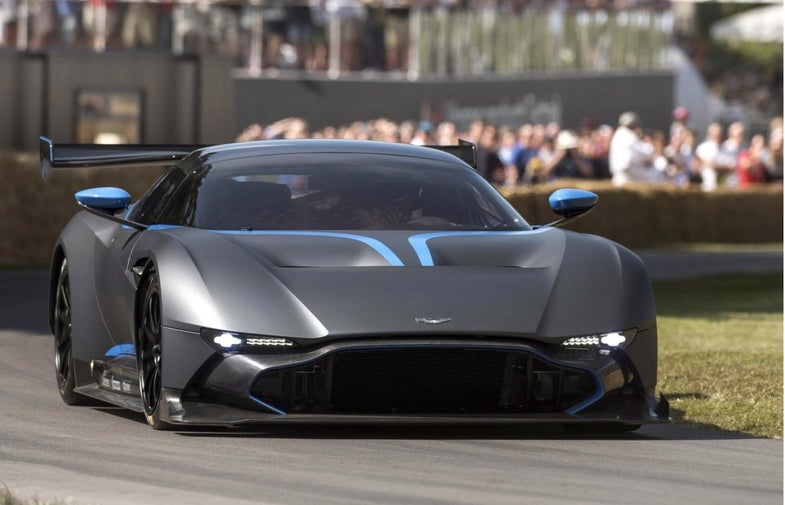 This weekend is the Spa 24 Hours, the highlight of the Blancpain Endurance Series, and this year a number of teams will be competing using the Aston Martin V12 Vantage GT3 race car. Another Aston Martin will be present at the Belgian race, though, and that’s the limited edition Vulcan track car.

Fresh from its dynamic debut at the recent Goodwood Festival of Speed, the 800-plus-horsepower Vulcan will complete two laps of the 4.35-mile Spa Francorchamps circuit located in the beautiful Ardennes, with works driver Darren Turner behind the wheel. There are few official lap times for Spa, but Koenigsegg’s One:1 supercar recently lapped the circuit in 2:32.14.

The Vulcan isn’t quite as powerful as the 1,341-hp One:1 but since it wasn’t intended for the street its design hasn’t been compromised by needing to conform with any road car regulations.

In case you’ve forgotten, the Vulcan is powered by a unique 7.0-liter V-12 and is made almost completely from carbon fiber. Aston Martin states that the car has more than 800 hp, and that it will sprint to 60 mph in less than 3.0 seconds and reach a top speed in excess of 200 mph. Just 24 examples will be built to celebrate Aston Martin’sparticipation in various 24-hour races.

The Vulcan will head out onto the track on Saturday, July 25 at 2:10 p.m. local time. The Spa 24 Hours will get underway roughly two hours later. Fans can watch live on the Blancpain Endurance Series YouTube channel GTWorld.