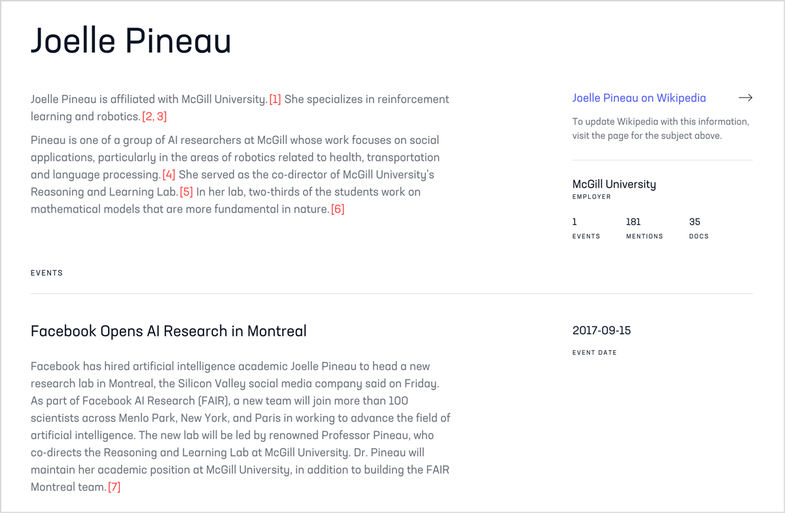 Plenty of prominent scientists have Wikipedia pages. But while checking to see if someone specific has a Wikipedia page is a quick Google search away, figuring out who should be on Wikipedia but isn’t—and then writing an entry for him or her—is much trickier.

For example, you may or may not have heard of Christina Economos. She doesn’t have a Wikipedia page about her, although she’s a professor at Tufts University and the New Balance Chair in childhood nutrition. But while she lacks a Wikipedia page, she does have a very short stub describing who she is professionally on a website made by a company called Primer. That little blurb, which could one day grow into a full-blown Wiki entry, was created by an AI system dubbed Quicksilver.

The idea behind the project is to use AI as a jumping off point. Humans can use it to help them write Wikipedia pages for scientists who don’t have them, but deserve to. For example, on Economos’ Primer page, there’s a link to an article from CBS Boston that mentions her—a good potential source for a human Wikipedia editor who may want to write an entry for her.

Primer launched officially last year and uses AI to read information and generate reports; part of its focus is doing the kind of work an intelligence analyst might do. Their customers include Walmart and the U.S. government, by way of an organization called In-Q-Tel. Artificial intelligence generally needs data to learn from, and so for this project, Primer used around 30,000 existing scientist Wikipedia pages to train their machine learning systems.

Then they fed 200,000 names and related employment information into their AI system. Those names came from the listed authors of scientific papers focused on computer science and biomedical research provided to Primer from the Allen Institute for Artificial Intelligence.

“That was the input to Quicksilver—we just fed it in, and we went home, and it ran,” says John Bohannon, the director of science at Primer. “We generated 40,000 new people overnight.”

The system as a whole is more complicated than that, of course: one step is that the AI system needs to do disambiguation (a weird term you’ve probably seen on Wikipedia) that in this case mean making sure that the system isn’t mixing up two people who have the same name. It also reads a slew of news sources to learn more about each scientist: “It builds a model of the person,” he says.

It also does “event detection” when scanning the news for each name, which entails organizing news documents into clumps in which “each clump seems to be describing a real world event.” That “news event” could be when a scientist publishes a study that garners media attention and is thus something possibly worth including in a Wikipedia article.

Another aspect of the project is to make it easier for scientists who are women to get the representation they deserve on Wikipedia—to empower human editors “to close the gender gap in representation of women in science,” Bohannon says. One of the ways that can happen is if a group wants to create more Wikipedia pages with a focus on women scientists, they could use data from Quicksilver, which Bohannon points out is filternable by gender.

“Our goal is definitely not to have a ‘bot write Wikipedia,” Bohannon says. Instead, it’s a launchpad for people who do want to write new pages or update old ones. If you’re curious to see a sample of what Quicksilver’s output looks like, head on over to this page—it has 100 examples of AI-generated Wikipedia-style blurbs.