Why Are These Stars Fleeing The Milky Way?

A new class of speedy rogue stars are accelerated by an unknown force. 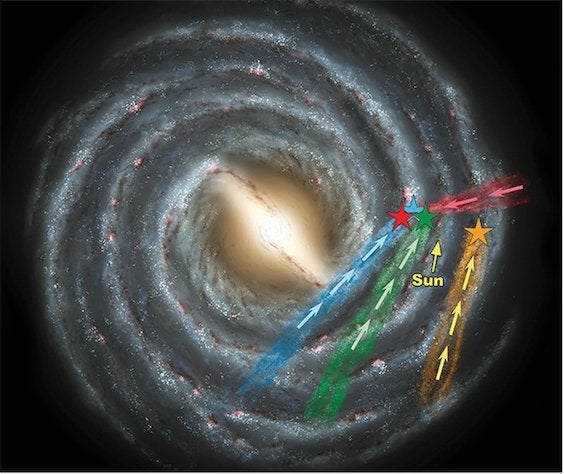 Top view of the Milky Way Galaxy show the position of four of the new class of hypervelocity stars. The colored bands show the general directions from which the stars have come from. These stars move at more than a million mph relative to the galaxy, fast enough to escape from its gravitational pull. Graphic design by Julie Turner, Vanderbilt University
SHARE

Astronomers have discovered a new class of potential hypervelocity stars that could suggest an alternative escape route from the galaxy.

Hypervelocity stars are so called because, uh, they travel really fast—enough to break free from the galaxy. Astronomers have long known that this can happen when a binary star system gets caught in a black hole’s grip. Under the right circumstances, one of the stars spirals in toward the black hole while the other is violently flung outward at a tremendous speed.

Over the past decade, astronomers have found 18 such speedy blue stars in the Milky Way that could have been created this way, all tracing their birthplace to the supermassive black hole at the Galactic center. But an international team of researchers has now discovered a new batch of 20 sun-sized hypervelocity stars that don’t appear to originate from the Galactic core, presenting a mystery to astronomers about their origins. The study was presented at the annual meeting of the American Astronomical Society last week.

So far, astronomers haven’t figured out how these new rogues gained their speed. Because the stars appear to have the same composition as normal disk stars, the researchers have ruled out birthplaces such as the Galaxy’s central bulge or the halo that surrounds it. But many possible scenarios remain: interactions within globular clusters, tidal tails or ejections from supernovae in the Galactic disk.

There is a catch though—measuring the speed of stars requires recording their positions accurately over decades. If a few of those measurements go wrong, the stars can seem to move a lot faster than they really do. But the researchers believe the majority of these candidates are real.

Next, they will verify the status of these stars and expand their search for more stars on the run.