The Week In Drones: Impersonating Superman, Fighting Smog, And More 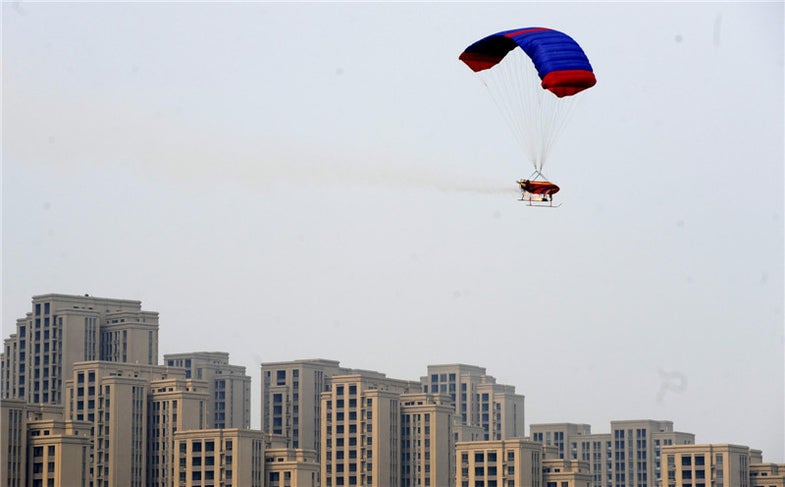 According to state-owned media, China is using small drones to battle its disastrous smog problem. These drones assist in two ways. In emergencies, a parachuting drone can spray a catalyst to dissipate thick clouds of smog, as in the image above. Drones can also film the smoke coming out of factory smokestacks; the color of the smoke can reveal illegal pollution.

A Lark Over Gaza

The Skylark is an Israeli drone that is launched by hand and remotely controlled to send video down to troops below. The 17-pound drone can fly for up to three hours and is similar to the RQ-11 Raven, which American forces used in Iraq and Afghanistan for scouting. The AP recently interviewed Israeli soldiers and got a look at the Skylark in action. Watch the AP video below:

This drone system, made by researchers at the University of Bristol and tested at a uranium mine in Romania, provides a way for scientists and public health officials to monitor radioactive sites after they have fallen out of use, without sending humans into toxic areas. Here’s a video explaining the system.

Corridor Digital’s short film “Superman With A GoPro,” shot using a commercial drone, shows the last son of Krypton on a mission to return a GoPro camera. On the way, he flies over several Los Angeles landmarks (including the Griffith Observatory!), rescues a woman from a burning building, and assists a police officer with two muggers.

This week, the United States boycotted a United Nations Human Rights Council discussion of drones. Said a State Department official: “But this particular resolution deals solely with the use of remotely piloted aircraft. We just don’t see the Human Rights Council as the right forum for discussion narrowly focused on a single weapons delivery system.” Perhaps next time the HRC can instead have a debate about the targeted killing policy writ large, and not just one weapon used for part of it.