In Time For The Holidays, Stores Add Robot Sales Clerks 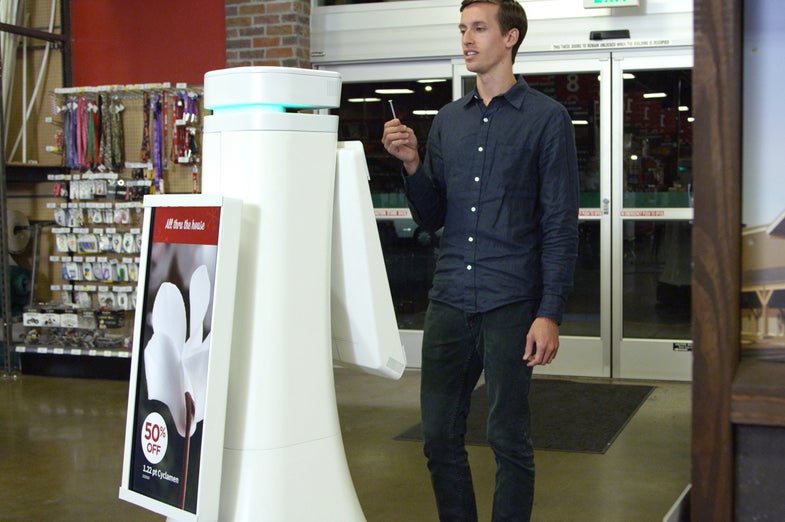 A promotional photo of OSHbot helping a customer at Lowes. Fellow Robots
SHARE

This holiday season, robots are coming to a store near you (if you live in Japan or San Jose, California). But they won’t be on store shelves. These robots will be helping you locate items on your shopping list.

Last week, two different companies announced that they would be introducing a robot salesforce before the end of the year. Nestle in Japan will add 1,000 robots to their workforce in December to help sell coffee and espresso machines. Their chosen model is an ’emotional’ robot called Pepper that is reportedly able to carry on conversations.

Pepper’s manufacturers, a company called Aldebaran, owned primarily by telecommunications giant SoftBank, hope to begin selling the robot in the United States within the next year, for businesses and individuals alike. What does Pepper do when not pushing espresso machines on people? According to the FAQ section on their website, “Pepper will help people grow, enhance their life, facilitate relationship, he will have fun with them, give some services and connect them with the outside world.”

That’s a tall order for a four-foot-tall robot. But Pepper will have at least a little competition entering the American market. Also last week, Lowe’s announced that in one subsidiary in California shoppers will be helped by a retail robot. OSHbot, made by Fellow Robots, is capable of recognizing voices, identifying hardware, and navigating aisles. They are expected to make their debut in Orchard Supply Hardware Store in San Jose in late November of this year.

Of course, robots as salespeople was bound to garner some criticism, and John Oliver ripped into the Lowe’s plan last night on his show, albeit in a very amusing way.