In Metadata We Trust, Minus The Margins Of Error

Just because a Russian soldier's Instagram says he's in Ukraine doesn't mean he is. 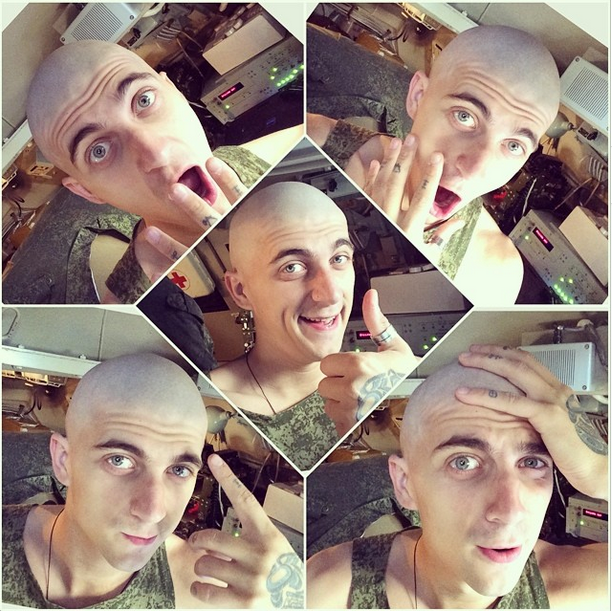 Sergeant Alexander Sotkin, a communications specialist in the Russian army, has big gray-green eyes, soft stubble, a strong chin—and a penchant for taking selfies. So far, the 24-year-old has posted 530 photos on Instagram: a typical mish-mash of his best angles, new tattoos, blurry concerts, and friends mugging for the camera. (He even has a few cute kitten pics thrown in for good measure.)

On June 23, the backdrop of Sotkin’s feed shifted when he and other soldiers were deployed to a base in Voloshino on the Ukrainian border. In the ensuing weeks, Sotkin continued updating his Instagram account from the conflict zone. Most of the photos were innocuous—Sotkin drinking water, Sotkin eating watermelon, Sotkin looking sleepy. But early on July 5th, one shot stood out. The photo itself is just another headshot, but the geotag—a data point indicating latitude and longitude—on his Instagram map indicated the photo was taken in the village of Krasnyi Derkul, just west of the Ukrainian border, where several major military engagements had recently flared.

BuzzFeed, which recently launched an investigative reporting unit, published a string of Sotkin’s photos under the headline, “Does This Soldier’s Instagram Account Prove Russia Is Covertly Operating In Ukraine?” The article also suggested Sotkin was in an SA-11 Buk surface-to-air missile system—a weapon that Russian-funded separatists used to blow up the Malaysian Airlines flight MH17. If true, this could have finally been cold, hard proof that Russian troops had encroached into eastern Ukraine.

But there are several problems with BuzzFeed’s conclusions. For one, no one knows how Sotkin’s location was geotagged. GPS is usually fairly precise, but it can be fickle depending on the weather, physical surroundings, and the gadget used to estimate GPS location. When software determines this data isn’t reliable, most phones triangulate an approximate position using nearby cell phone towers and basic geometry. By sending signals to the towers, whose stationary locations are known, the lag in response times can roughly estimate the phone’s position. The more towers, the more accurate the process is, but even in densely packed urban areas, it’s always an estimation.

This could have finally been cold, hard proof that Russian troops had encroached into eastern Ukraine.

Rural eastern Ukraine isn’t exactly reknown for its cellular infrastructure. So, there’s a strong likelihood that Sotkin’s location contained a margin of error large enough to explain the roughly five miles of distance between Voloshino and Krasnyi Derkul. It’d certainly be large enough to call into question whether he actually crossed the border. Other parts of the accusation haven’t panned out either. For example, “buk,” a crucial part of a caption that led to the alleged claim about the SA-11, turns out to be Russian slang for notebook computer, and Peter Vine on Medium pointed out the word was followed an emoji of a laptop. And then there’s the ability for an Instagram user to choose a nearby location by name, even if that location is many miles away.

That’s not to say there aren’t Russian troops in the Ukraine. There’s video evidence that Russian tanks are headed toward the border. Russian soldiers are tweeting pictures of convoys on the move. And the border discussion itself may soon become academic: The Obama administration has released surveillance photos showing Russia has fired artillery rounds from within the country against Ukrainian targets, basically proving Russian authorities haven’t been telling the truth about their support of separatist insurgents. But a modicum of restraint in interpretations is important if Internet sleuthing is to be of real service—the false culprits fingered in a Reddit frenzy following the Boston marathon is another poignant example of the danger of leaping to conclusions.

Veracity aside, the whole debate is a good reminder of what most of us cheerfully Snapchatting, Instagramming fools conveniently forget: Our phones store metadata with every photo we take. Unless you spend a lot more energy than most people finding tools that scrub your files, EXIF data on every selfie includes the GPS coordinates of your photos, the time they were taken, and enough other information that makes it easy to track down personalized details about you. Even if there’s no embedded EXIF data, if a photo’s location is placed on a map, software can scrape those locations and associate them with the images.

The impact this has on our privacy is profound. Programmer and artist Owen Mundy recently visualized these kinds of privacy issues in his project, I Know Where Your Cat Lives. Using publicly available photos from people’s feeds, he locates photos of cats on a global map, with an estimated error margin of 7.8 meters. “I have a daughter and had been posting pictures of her on Instagram,” Mundy told Vice. “Then I realized Instagram had created a map of every picture I had been sharing with the world. That scared me.”

If this frightens you enough to do something different, you can download metadata apps like TrashExif to doctor your photos before sharing. Or, as a Russian lawmaker proposed in a new ruling that would forbid soldiers to use social media, the best way to keep delicate subjects private may be to refrain from posting altogether. (Common sense, perhaps, but it’s a larger philosophical commentary of the times we live in that this is not always immediately obvious.)

Still, the positive spin on all this sharing is its humanizing effects: If you just read Sotkin’s captions, you see a young man wrestling with the overwhelming boredom that can come with quiet time in conflict zones. “I still don’t understand what we’re doing here,” Sotkin wrote in one caption, “so we’re continuing to go slightly crazy, listen to #swedishhousemafia and wait for new news from Ukraine!”

Such an intimate insight into a stranger’s life helps us remember that boots on the ground are young men too.