This Robot Pierces Your Cheek To Reach Your Brain

Sounds painful, but it might be better than drilling. 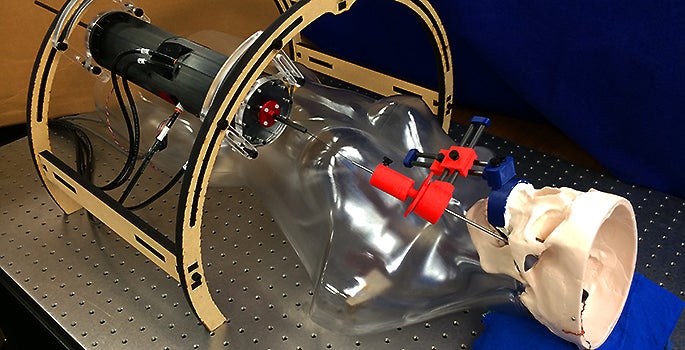 In the future, some forms of brain surgery may not require surgeons to drill through your skull.

Researchers from Vanderbilt University have announced a robot, still under development, that can target precise spots in the brain through the cheek–a route that could avoid critical regions of the skull and nervous system. For patients with severe forms of epilepsy that do not respond to other treatments, the robot could offer a far less invasive form of surgery than traditional approaches, which sometimes involve drilling through the skull to destroy epilepsy hotspots in the brain. But that procedure is a last resort because of its risk to patients. This robot could follow a precise, twisting path through the brain that would minimize damage.

“[The needle] feels springy, ” says David Comber, a graduate student who worked on the design.

The springyness enables the robot to force the heated nickel and titanium alloy needle through a tube and cast it in the shape of its eventual route through the brain. After the needle emerges from the end of the tube, bit by bit, it returns to its original shape. “It’s like an inch worm where you’re incrementally advancing the needle,” Comber says.

Eventually, doctors will conduct the surgery inside an MRI machine, which can track the needle’s minute progress through the soft tissue. But making sure that progress doesn’t slice up the surrounding brain is a challenge.

“Whatever path the tip takes, the next segments have to follow that,” says ComberAny deviation could be devastating. Their machine’s reported accuracy is 1.18 millimeters — only 0.04 millimeters wider than the needle itself.

Eric Barth, who designed the pneumatic systems that force the needle through the tube, and Bob Webster, who studies memory alloys, came up with the project when discussing ways their research could intersect. Comber and neurosurgeon Joseph Neiman got involved farther down the line to help address the particular challenges of building a robot capable of neurosurgery. They expect to see the device used in surgery within a decade.