DJI's quadrotor flyer gets an onboard camera and smartphone integration. 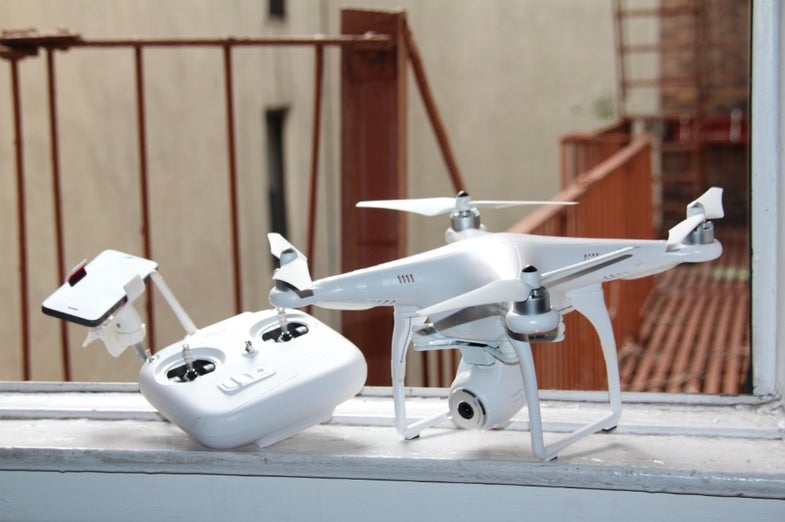 The world of consumer-ready drones is in its infancy, with only a few ready-to-fly options in existence. But DJI’s Phantom 2 Vision is evidence that the space is maturing. With its latest offering, DJI offers a complete, integrated aerial photography tool, an easy-to-use quadrotor that’s much more than an RC helicopter with a camera strapped to its belly.

The Phantom 2 Vision follows the release of DJI’s first-generation consumer-ready unmanned aerial system (UAS) last year, a quadrotor known simply as Phantom. Phantom was a whole lot of fun to fly (PopSci reviewed it at the time), but it wasn’t exactly the simple “ready to fly” experience we were hoping for. In its second iteration, DJI has gone a long way to smooth out some of the more cumbersome aspects of the original Phantom and then, by adding mobile connectivity, created something beyond just a flying machine. The newest generation in the Phantom series packs an integrated 14-megapixel camera and a Wi-Fi link that allows the user both to control the camera and to see what the drone is seeing. Yet, as with any good piece of gadgetry, all the machinery that makes this integrated system work is neatly concealed behind the scenes. Within minutes of topping up the battery charge we had the Phantom 2 Vision out of the box, synced up to an iPhone, and whipping through the air capturing vistas of the NYC skyline from 300 feet. Factor in the fact that the aircraft itself is a whole lot of fun to fly, and you’ve got something that’s part recreational aircraft and part gadget–a complete system that feels much more like a complete product.

For those not serious enough about flying a UAS to build one themselves, but serious enough to shell out more than a grand, that’s exciting news. We’ve played with the Parrot AR series of quadrotors (tons of fun but essentially toys) and we’ve watched massive defense contractors demo state of the art quadrotor UAS designed for military, police, and search and rescue tasks. Once again, DJI has created something that fits in the space in between–part recreational aircraft and part high-tech tool, the Phantom 2 Vision feels much more like a complete product than its predecessors. 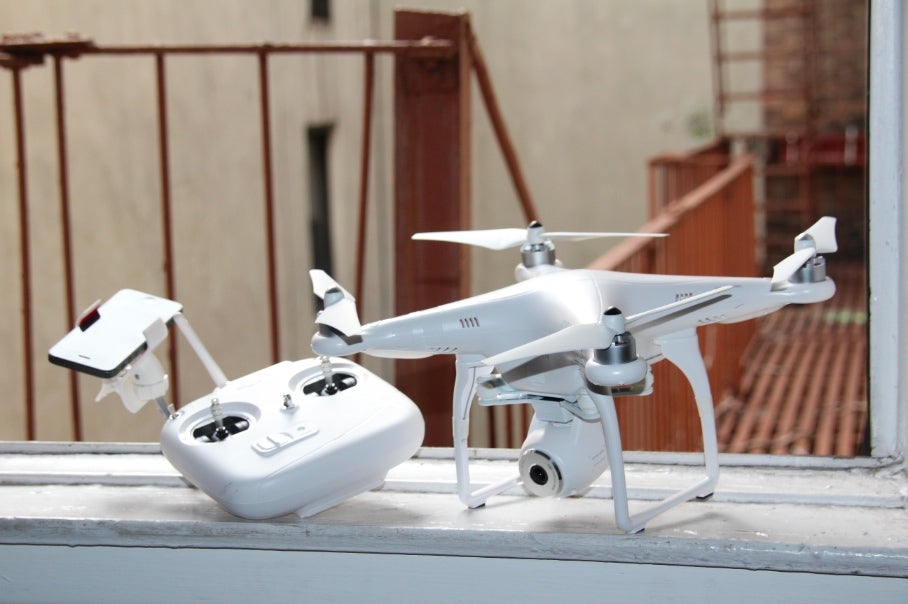 The specs for the Phantom 2 Vision haven’t changed significantly from the first-generation Phantom (for a more thorough breakdown of the features of the air vehicle itself, check out our previous review of the first-gen Phantom). The quadrotor itself is roughly the same size and weight as its predecessor and maintains very similar flight characteristics, though it’s worth noting that the Phantom 2 Vision has a listed top speed of 15 meters per second, compared with 10 meters per second for the first-gen Phantom. DJI does not recommend you push the Phantom to the edge of its performance envelope, but we took it up to 16 meters per second–roughly 35 miles per hour–with no catastrophic result.

There are lots of little tweaks to the aircraft, both slight and significant. Some, like the enhanced battery and the easier out-of-the-box experience will be discussed in more detail later. The primary difference between the Phantom 2 Vision and its predecessor is the integrated camera and the connectivity that allows the pilot not only to see what the drone sees but to control the camera while also accessing an array of flight data via a dashboard displayed on an iOS or Android device (smartphones clip securely into a universal mount on the remote control itself). Linking these three pieces of technology–the aircraft, the camera, and the pilot’s mobile device–greatly enhances the flight experience. It also opens the door for some seriously mind-blowing aerial photography and video (as you can observe in our video). 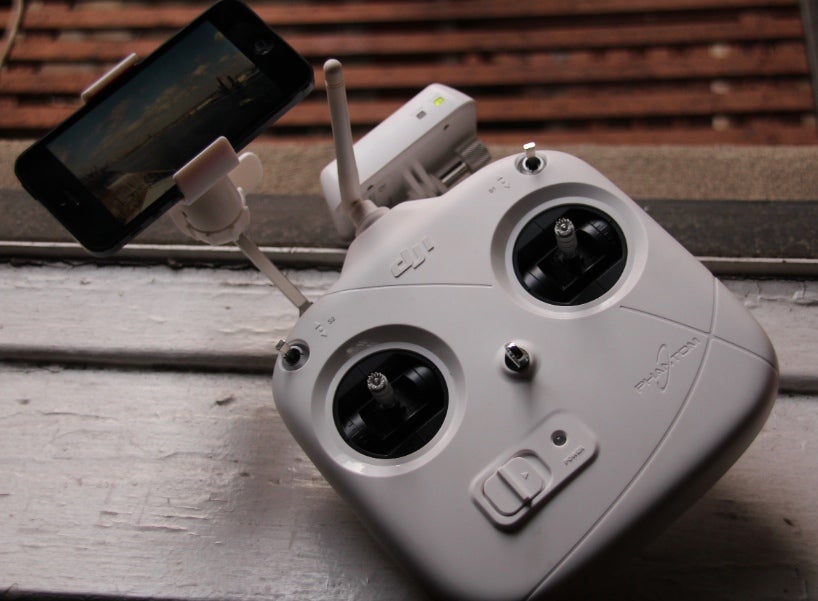 The aircraft is controlled via the familiar dual-thumbstick RC control scheme, while the camera is operated via a separate Wi-Fi connection with an app on the user’s mobile device. The white box attached to the front of the controller is a small Wi-Fi signal booster.

The addition of both camera and connectivity allows for a real shift in what we expect from RC interfaces, piling visuals and data on top of the thumbsticks that have served as the intermediary between pilot and RC flying machine for decades. Those thumbsticks are still there–the two-stick remote control guides the aircraft using pretty much the same standard inputs as an RC helicopter, making the Phantom 2 extremely intuitive for RC enthusiasts to pick up. Meanwhile, the app-based dashboard that runs on the user’s mobile device both controls the onboard camera and serves as kind of flight instrument panel akin to that found in an aircraft cockpit, making the user experience is less like “remote controlling” and more like “piloting.” So you don’t have to link up the Phantom 2 with a mobile device to operate the aircraft (the flight controller and the mobile device connect to the aircraft/camera via separate connections), but for the full experience–and for any kind of aerial photography–you’ll want to.

Integrated Camera: For aerial photography purposes, the Vision’s integrated, gimbaled camera packs plenty of punch. Capable of shooting video at a range of resolutions and aspect ratios (HD at 1080/p30 or 1080/60i) and still photographs up to 14 megapixels, it’s a rig designed for shooting sweeping panoramas from way up high (we found that around 350 feet up we tended to lose Wi-Fi connection between the iPhone and the camera, but we suspect that being in interference-heavy Manhattan might have had something to do with that). Panning is controlled by rotating the aircraft itself, and the motorized gimbal allows the pilot 60 degrees of tilt via touchscreen controls on the DJI app interface (this is also where the shutter button, video record button, and other camera control functions are located). That app interface also makes for easy image and video management; the Phantom 2 Vision stores its image and video files on a local microSD card, but via the DJI app the user can move all images and videos to the mobile device wirelessly.

Aside from aerial imaging applications, the camera also serves as an aid to the pilot, helping to establish orientation and avoid obstacles while also layering a nice first-person experience onto the whole enterprise. Just be advised: Neither PopSci nor the FAA recommend operating the aircraft beyond line of sight. In fact, while PopSci merely discourages it, the FAA prohibits it. Safety first. 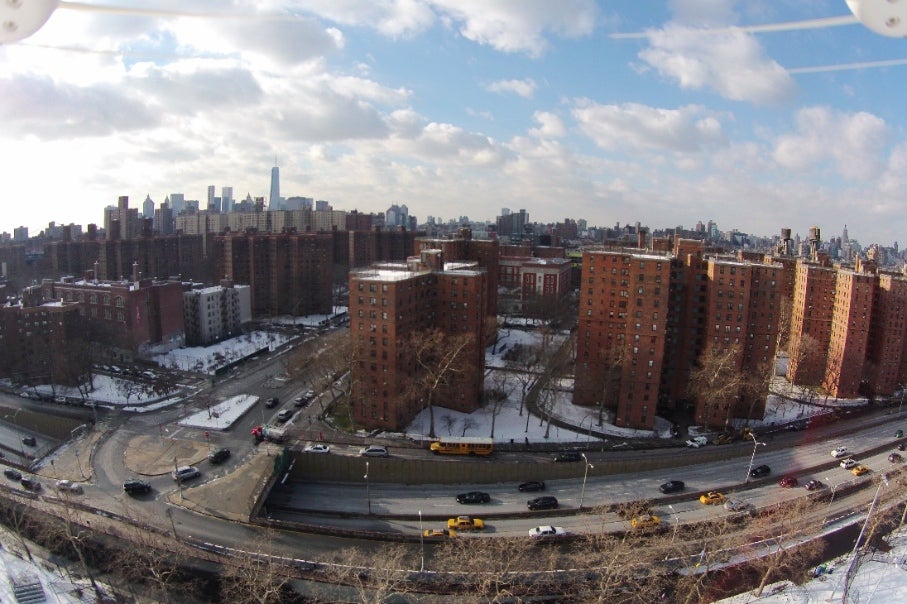 Device Connectivity: Connectivity with the pilot’s mobile device, in tandem with the camera, is what makes the Phantom 2 Vision really click, creating a smooth interface between user and machine. The intuitive DJI app provides the user with a drone’s-eye-view beamed straight from the camera and overlays it with flight data like battery level, speed, altitude, and distance from pilot–the last two being particularly important given that, as mentioned previously, the Wi-Fi connection and the remote control connection can break if aircraft and pilot are too far apart. There’s also an on-screen compass that helps the pilot maintain orientation–that is, to remember which way is forward–something that could be somewhat frustrating when flying the first-gen Phantom.

And because the Phantom 2 Vision, like its predecessor, uses GPS to maintain flight stability (more on that later) there’s a “Find my Phantom” function that shows you the location of your UAS on the map in case you somehow ditch into the tall grass.

Ready to Fly: The first-generation Phantom was billed as “ready to fly,” but we didn’t find it to be exactly that. There was a decent amount of assembly required, and beyond that it wasn’t exactly quick or easy to break down the original Phantom for transport. The Phantom 2 is a neatly-packaged leap forward. The propellors are self-tightening and simply screw onto the rotary motors with no extraneous fasteners or hardware required (they come off just as easily for storage or easy transport). The battery charging procedure–which was actually kind of cumbersome for the first-generation Phantom–is vastly simplified, the way it should be. Battery charge time notwithstanding, the Phantom 2 Vision can be unboxed and ready to fly in a matter of minutes.

A Better Battery: That about sums it up: The Phantom 2 Vision comes with a better battery brick than its predecessor. Full charge time is about an hour for a drained battery. DJI lists the fight time of a fully-chared battery at 25 minutes, a ten-minute improvement over the first-gen Phantom. The good news: we got roughly 10 minutes more than the listed flight time out of both the Phantom and the Phantom 2. Assuming you’re not running with the throttle wide open for the duration, expect to get half an hour of flying time out of a full charge (maybe even a little more).

The Controller: There’s nothing particularly headache-inducing about the Phantom 2 Vision’s controller. It’s just bulky, and by the time you attach the included Wi-Fi signal booster and a mobile device to it you’re basically hauling around a small command console. Something a bit smaller wouldn’t hurt for both ease of transport and for flight. Also, the way the pilot’s smartphone clips into the controller mount leaves it woefully exposed to overhead sunlight, which in turn makes it difficult to see what’s on the screen. A redesigned controller might be able to mitigate both issues somewhat.

The Battery: Just because it’s better than its predecessor doesn’t mean we’re not going to complain about it. This is an outdoor machine, which makes it particularly annoying when it only flies for half an hour before it requires a wall socket. This isn’t DJI’s fault–even military grade quadrotors that cost orders of magnitude more than the Phantom only get something like an hour of continuous flight time. But it’s something that, if improved, would go a long way toward making this a much better product. In the meantime, DJI sells extra battery bricks for $159. 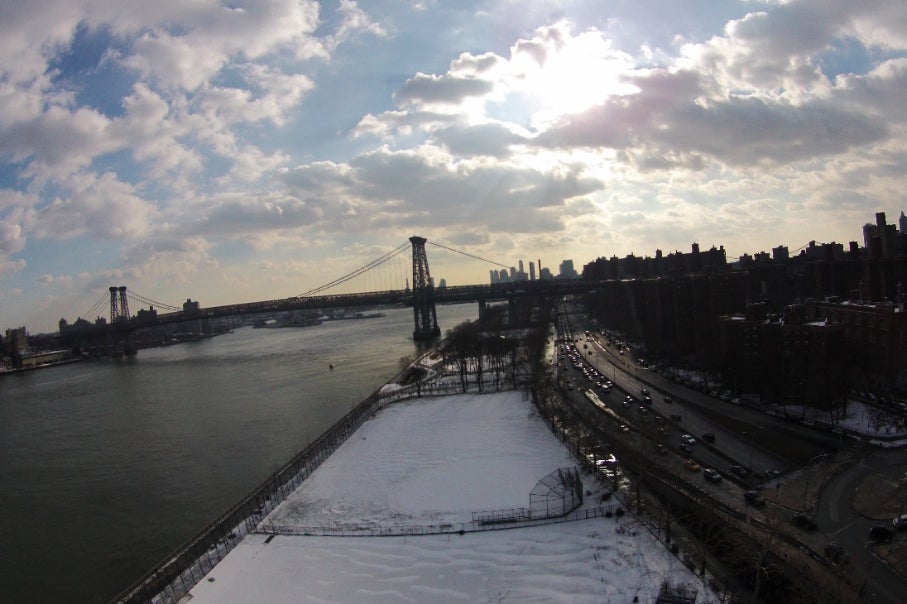 A View from a Drone

For a full breakdown of the Phantom’s flight characteristics check out our review of the first-gen Phantom, which goes into its GPS-enabled flight stabilization in detail. For the purposes of this review–especially as it pertains to photography–suffice it to say that autopilot is one of DJI’s core competencies and that this aircraft is well-equipped with technology that takes a lot of the work out of piloting.

By syncing with GPS satellites each Phantom knows where it is in space. If it becomes disconnected from the pilot for any reason, it knows how to safely pilot itself directly back to where it took off from and land safely (and hits the mark with surprising accuracy). And though factors like wind still affect the aircraft, its on-board technology is very good at mitigating outside effects. As far as stable hover and smooth flight are concerned, the Phantom series drones are the best we’ve reviewed. That’s especially important when you’re trying to capture video that won’t give viewers vertigo. It’s only fair to note that the video accompanying this piece was shot on a gusty December afternoon in NYC, and even in those unfavorable wind conditions the aircraft performed admirably.

$1,199, available through DJI or a handful of dealers listed on the site.

As the FAA issues guidance on how these kinds of aircraft will be regulated in the future (such guidance is expected in 2015) expect them to proliferate. Where consumer-ready UAS are concerned, DJI has jumped into its own space, offering something that’s beyond a high-end toy but not so high-tech and component-heavy that it costs a year’s salary to own or requires specialized training to operate.

What we found most significant about this second-generation Phantom is the technology integration–the mobile device connectivity, the app integration, the integrated camera–that make the Phantom 2 Vision something more than just a RC aircraft. The interface and expanded photography/video applications make it feel much more like a complete product–the first of many like it that we’re going to see over the next several years.