This Portable Blowtorch Uses Only Water As Fuel

UK-based researchers say their new system is safer and cooler than other gas-fueled metal-melters. 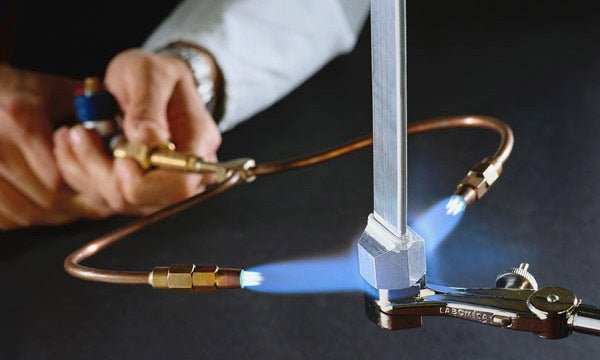 SafeFlame is designed for use in brazing, a process similar to welding that joins two metal pieces together by melting another metal joint between them, usually from a metal with a lower melting point like copper. Current brazing systems mostly use flammable gasses like acetylene or propane as fuel for portable torches, which pose a fire and explosion risk in highly pressurized containers. This system stores its fuel in water form, eliminating the explosion risk from pressurized gas.

This water-fueled torch doesn’t burn as hot as other gas torches, so can be used with metals that are more sensitive to heat, and the flame doesn’t heat up the body of the torch, according to ITM Power. Plus, it only produces water when it burns. The prototype is being tested by some UK welders now. Euronews reports that it will be available to the public “in the near future.” See how it works in their video (with a great fire-related pop soundtrack).