In preparation for another two years' work. 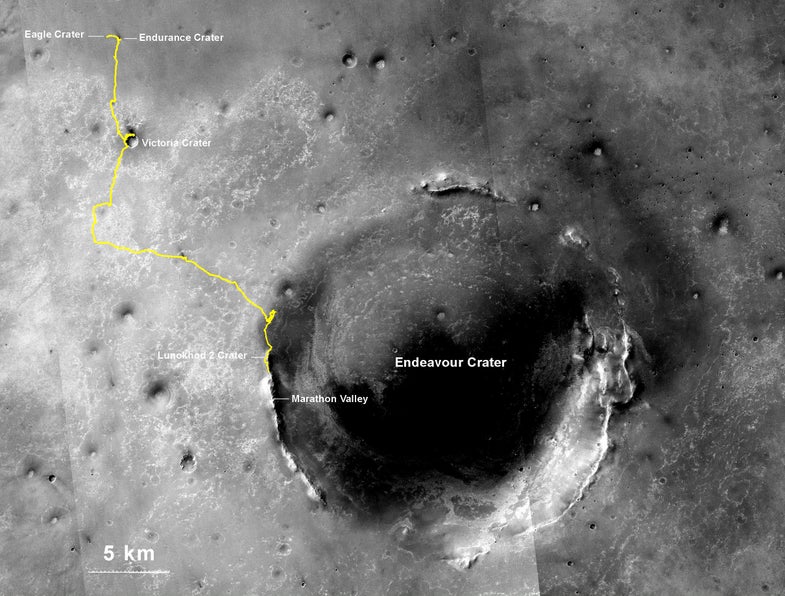 The rover is heading to Marathon Valley. NASA/JPL-Caltech/MSSS/NMMNHS
SHARE

Nearly a decade after it landed on Mars, NASA’s Opportunity rover is about to get a fresh start. Opportunity’s engineers plan to reformat its flash memory, which is good news, as the rover’s mission has been renewed for another two years, Nature News reports.

Over their lifetimes, Opportunity and the now-dead Spirit rover provided crucial evidence that Mars once held persistent, neutral liquid water. Now, Opportunity’s engineers are hoping the rover will make it to a site called Marathon Valley, where astronomers think there are several layers of exposed clay minerals that Opportunity could examine. The clay-ey site’s name is a nod to Opportunity’s journey, as the rover will have driven a marathon’s distance by the time it gets to the valley. Opportunity already holds the record for the longest distance ever driven by wheels on a surface not on Earth.

Engineers have to perform some fixes, however, to ensure Opportunity’s instruments will be ready for Marathon Valley. Over the past few months, the rover’s computer has been resetting itself, interrupting its master sequence — the machine’s daily to-do list from its masters on Earth. The resets slow down Opportunity’s data-gathering. NASA engineers think that Opportunity’s flash memory has some worn-out cells, and a reformat will help them identify which cells to avoid in the future.

Engineers previously reformatted the flash memory on Spirit, but this will be the first time they’ve tried to reformat anything on Opportunity. Whether or not the reformatting works, the rover has proved incredibly long-lasting; its original goals were to survive three months on Mars and to drive only 0.62 miles.