Nigeria Shows Off Its First Drone 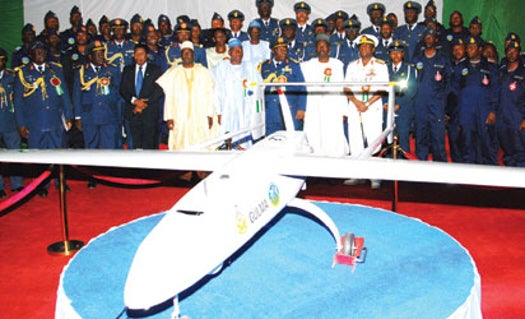 Behold the GULMA. Unveiled by Nigerian President Jonathan Goodluck on Monday, the GULMA is the country’s first locally designed drone. The drone bears a passing resemblance to the Falco ES used by the United Nations, and it should function in much the same way: as a flying eyeball to help a conventional military fight criminal and guerilla groups. This is the face of drone proliferation, and as arms races go, it’s pretty mundane.

According to Nigerian Air Marshal Alex Badeh, the name GULMA comes from a word in the Hausa language that means “gossip.” It’s a clever name the drone is a tool of reconnaissance, surveillance, and intelligence gathering. It’s less fly-on-the-wall and more whispers-in-the-wind.

And gossip GULMA must. Nigeria faces several conflicts within its borders where drones would be very useful. In the north, Nigeria is wrestling with the Boko Haram Islamist insurgency, which operates in a rural area with mountains and forests sometimes offering shelter. In the south, armed militants hide out in the largely impenetrable and difficult-to-patrol swamps of the Niger Delta. Both groups have threatened the stability of Nigeria over the past decade. Boko Haram remains a persistent threat, and violence by militants in the delta could flare up for the upcoming 2015 elections.

Military drones are at their most useful fighting against insurgencies and armed militants in otherwise difficult-to-patrol places. Faced with internal threats, it makes sense that Nigeria is trying to build its own tools for defense. The GULMA is directly inspired by three Aerostar drones, which operated in Nigeria until they were grounded by problems getting spare parts. According to Badeh, the total cost of developing the GULMA, as well as training 15 pilots, was less than $3.5 million.