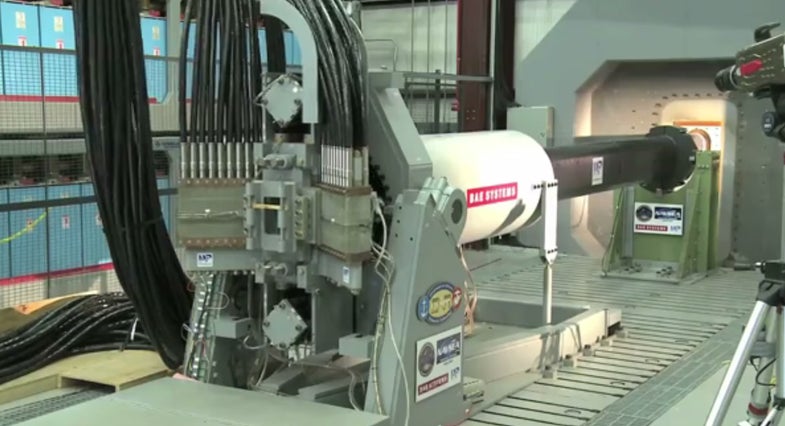 In 2016, the U.S. Navy is going to test a railgun—a weapon that can repeatedly launch a projectile at more than 5,000 MPH—from a boat. In 2018, they’re going to do it again. And in the 2020s, the Navy is going to figure out just what to do with a gun that seemed like science fiction decades ago.

Speaking at the Navy League’s Sea Air Space exposition in National Harbor, Maryland, Rear Admiral Bryant Fuller told the assembled crowd of journalists, servicemen, and defense contractors that railgun shots cost 1/100th the price of a “standard” missile. (In the age of austerity, even something as futuristic as a railgun is sold on the premise of cost savings.)

A railgun works by generating a strong electromagnetic current that flows from one rail, through a U-shaped back end of the projectile, and into another parallel rail. This generates three magnetic fields—a parallel one around each of the rails, and a perpendicular one around the projectile. Squeezed forward by the magnetic fields, the projectile accelerates rapidly along the rails and is then launched forward, breaking the circuit. The end result is a large metal slug that can go very far, very fast.

Here’s a video explaining the physics:

Scientists figured out the physics behind rail guns awhile ago, and have tested them on land, but the main constraint on making a practical one is generating enough electrical power.

That’s understandable. A railgun system needs 25 megawatts of energy flowing through it, and according to Captain Michael Ziv, the Navy’s program manager for rail guns and energy weapons. Most currently serving destroyers don’t have more than nine megawatts of electricity that they can shift around.

Future ships like the Zumwalt class of destroyers with “integrated power systems” that make it really easy to assign electrical power can get around this. The Navy is keeping open the option of outfitting current ships with railguns, as they can bring batteries storing the extra power needed on board. The Navy is going to test the railgun at sea in 2016 from the back of the USNS Millinocket, a transport and supply ship.

How far the shot goes depends on the power supplied. Smaller railguns might release a projectile at 20 megajoules, which means that at flying level it can go up to 60 miles. A larger railgun, the kind that draws 25 megawatts of power, can release projectiles at 32 megajoules of energy, where they will travel up to a 110 miles at a level trajectory. With the 25 megawatts, a railgun can also fire up to 10 times a minute, creating an anti-ship or anti-coastal weapon that’s fast firing, cheaper than a missile, and at least as deadly.

If the tests go well, it’s not just the Navy that’s interested. The U.S. Army is working with the Navy to develop railguns, meaning the weapon could one day attack from land or sea.

Here, by the way, is what one of these weapons looks like firing from land: