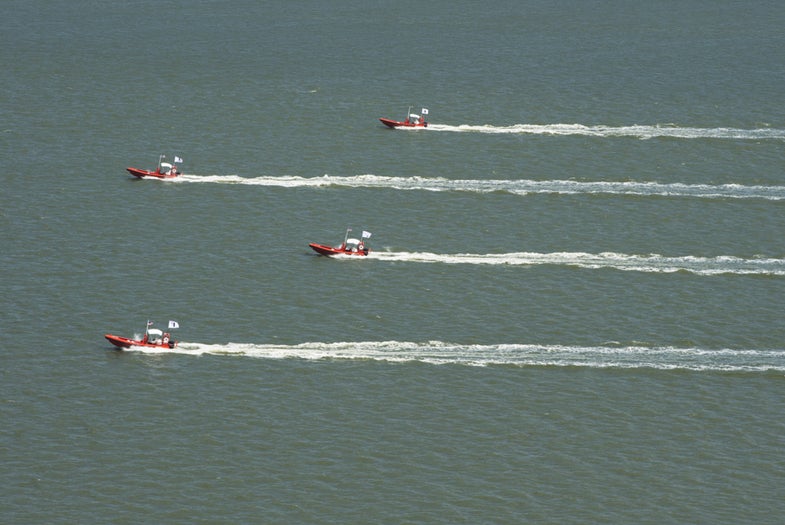 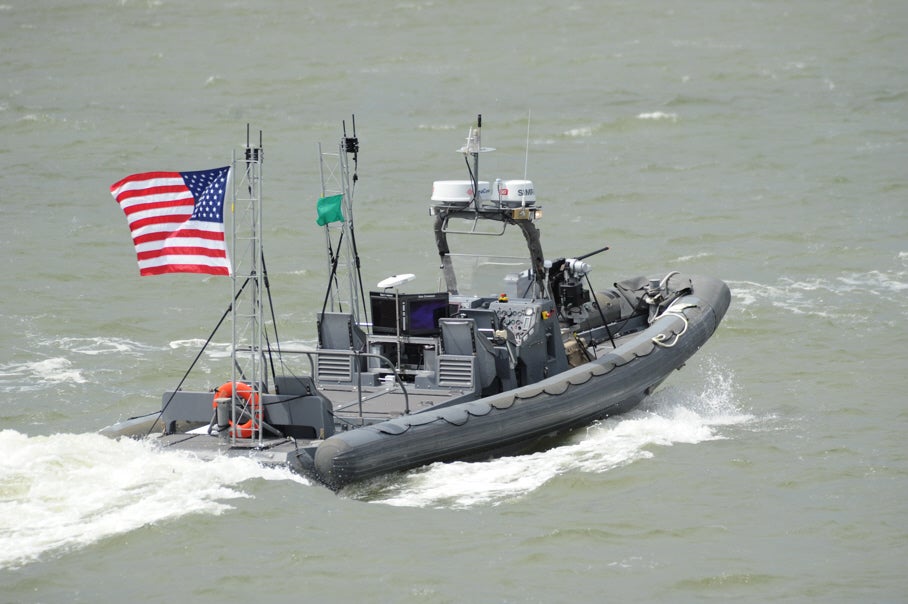 Call them sea drones, dronaughts, or roboats, the Navy demonstrated a swarm of remotely-controlled boats on the James River in Virginia this August. As if animated by the same mind, the 13 patrol boats all moved in unison, their crewless decks painting a picture of what warfare may soon become. The project, by the Office of Naval Research (ONR), wants to save both lives and costs, keeping sailors out of harms way while still keeping boats in the water.

Key to the boats is a program named Control Architecture for Robotic Agent Command and Sensing, or CARACaS. According to the ONR, CARACaS “allows boats to operate autonomously, without a sailor physically needing to be at the controls—including operating in sync with other unmanned vessels; choosing their own routes; swarming to interdict enemy vessels; and escorting/protecting naval assets.”

In the demonstration, the Navy boats first escorted a “high value unit,” simulating a ring of robotic bodyguards around a vessel in a narrow part of the sea. Then, with the support of a manned helicopter overhead designating a “contact of interest” for the boats to intercept, they swarmed around their target. 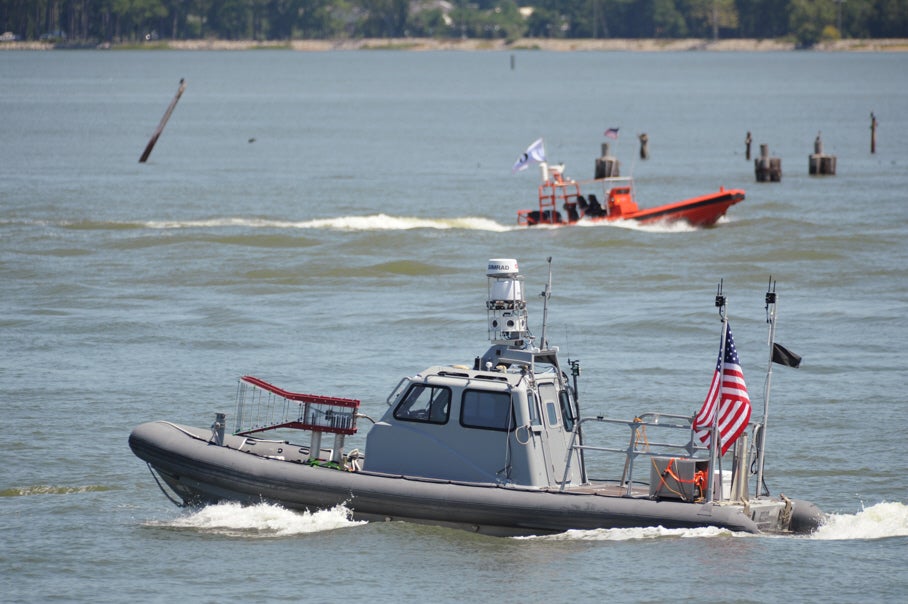 The boats’ autonomy is enabled by a sort of hive-sense. The unmanned surface vessels are linked, and together, they share information from their sensors. Each boat knows its own surrounding environment and the location of other vessels, and it shares this situation awareness with the other ships in the swarm.

On the phone with media, Read Admiral Matthew L. Klunder and ONR program manager Robert Brizzolara confirmed that, while the robot ships had the ability to move on their own, there is “always a human in the loop” before the robot boats fire their weapons. And that human may very well be singular; the 13 ships of this demonstration were all controlled by one sailor. Should the signal with the controller be lost, the boats will stop themselves. There’s also another kill switch that the controller can press to make the robot boats stop dead in the water.

The boats are all patrol craft, typically crewed by four to five sailors. Replacing the crew with robotic controls means the Navy needs 40 to 50 fewer people for a 13-ship exercise. That means more lives out of harms way, as well as saved costs on personnel. The boats are existing Navy craft, and ONR said they were armed with a variety of weapons — from .50 caliber machine guns to high-powered microwave weapons. 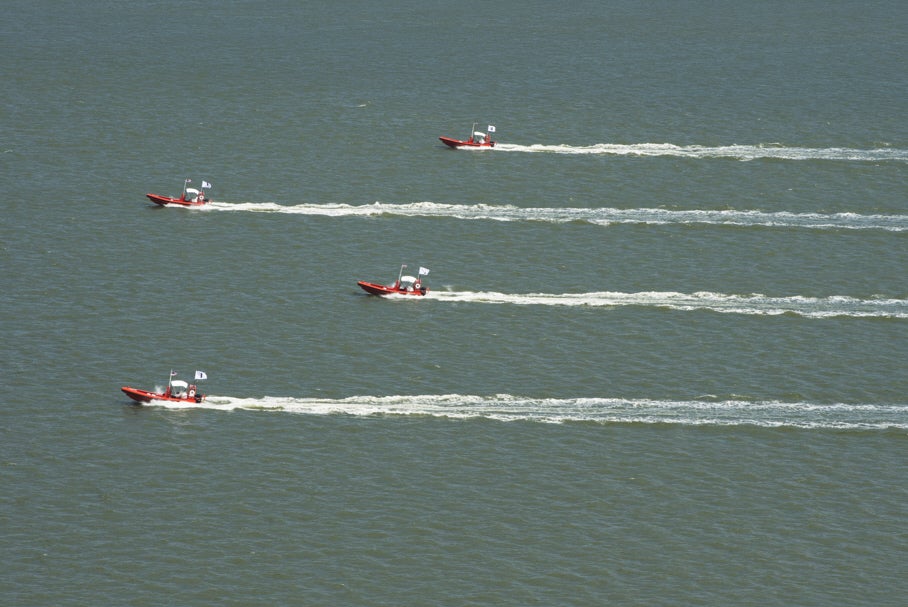 For the immediate future, this means that the Navy can do more with less. They can perform more patrols, since unmanned swarms of up to 20 boats can be controlled by one sailor at a time. And they can use fewer people; round-the-clock patrols only require one new sailor at the controls every few hours, instead of 50 sailors out in the water every time.

More patrols with small ships surrounding big ones will make larger vessels safer, as well. Multiple times during the media call, Klunder and Brizzolara mentioned al Qaeda’s suicide bombing attack on the destroyer USS Cole in October 2000. As the Cole refueled at a Yemeni port, a small foreign craft approached the side of the destroyer and exploded, killing 17 sailors and injuring 39. Klunder specifically stated that “the systems we put on the water would have prevented” such a terrible tragedy. Klunder didn’t specify how the robotic patrol boats would have saved the Cole, but it’s possible that an unmanned robot boat could intercept a vessel full of suicide bombers. Then, the robot could either disable the attacking vehicle or cause any explosions to detonate prematurely, with no American lives lost.

Protecting the fleet is the first and most obvious use of CARACaS, but autonomy and swarming have the potential for so much more than just intercepting small boats. Klunder says that while people might not accept CARACaS on a destroyer soon, the technology would work for merchant vessels and larger ships. If the trend on the sea is moving away from crew (as seen in both military and commercial vessels) in favor of automation, CARACaS is leading the way. First patrol boats, then the high seas.

Watch a video of the exercise from ONR below: