“Never before have we seen a cometary surface in such detail." 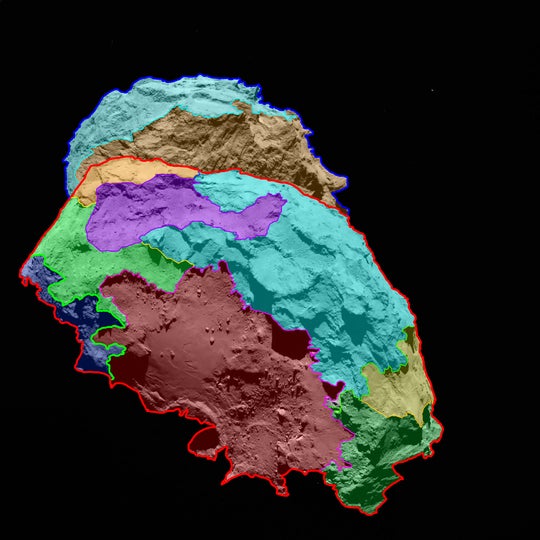 On August 6, the European Space Agency’s Rosetta spacecraft arrived at Comet “67P/Churyumov-Geraskimenko,” making it the first vehicle to reach and orbit an asteroid. Ever since, the two bodies have been engaged in something of a cosmic dance, moving in sync with one another as Comet 67P’s elliptical orbit brings it closer to the Sun.

The celestial tango is only temporary, meant to give Rosetta time to figure out the right place to land on the oddly shaped rock (sometimes lovingly referred to as the Rubbery Ducky comet). But in the meantime, it has also afforded the spacecraft with a unique opportunity: getting some really killer photographs of an asteroid. OSIRIS, Rosetta’s scientific imaging system, has taken a number of high-resolution images of 67P since its arrival, and they reveal the comet to be a truly multidimensional world.

Now, scientists at the Max Planck Institute for Solar System Research have plotted the different regions of 67P, making a multi-colored map that looks something like Pangea (or a psychedelic human heart). Each area is defined by unique morphological characteristics, meaning the comet has a multitude of different terrains. Cliffs and boulders dominate some regions, while others house large depressions, craters, and even parallel grooves. Many of the areas are quiet, while others are shaped by the comet’s activity in space.

According to the Max Planck researchers, the map is made possible given the “unprecedented resolution” of the photos. “Never before have we seen a cometary surface in such detail,” says OSIRIS principal investigator Holger Sierks. In some of the OSIRIS images, one pixel corresponds to 75 centimeters in scale. Dang!

As 67P and Rosetta near the sun, scientists will continue to monitor the comet’s surface for any changes. Though they don’t expect much activity, subtle transformations in the surface could help the researchers better understand just how the comet morphed into the complex world it is today. 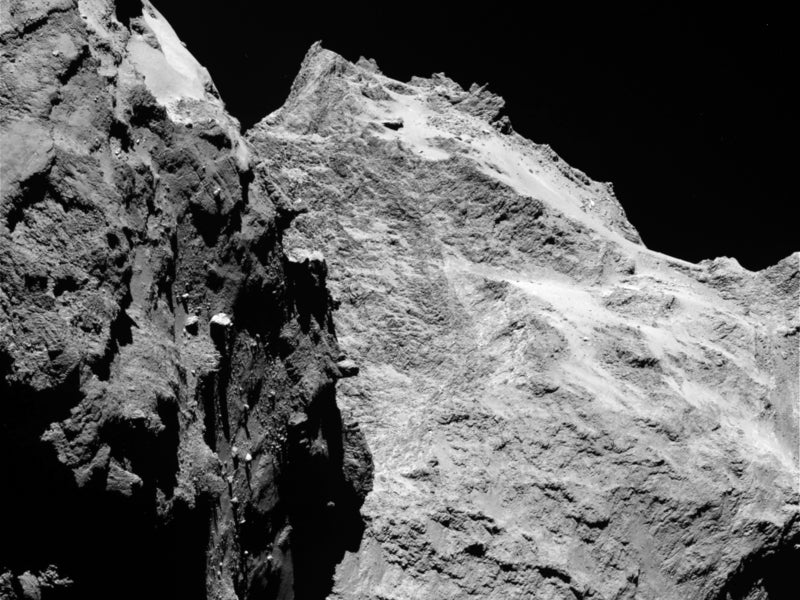 Variety Is The Spice Of Life

In this image, the variety of different surfaces on 67P can be seen.
Space
asteroids
comets
maps
rosetta