A shop class for the future 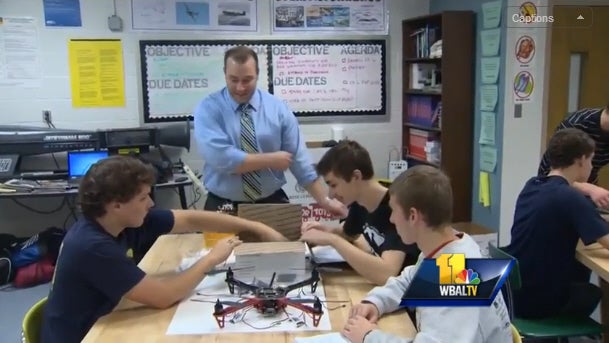 In the classroom are two teachers, 12 students and four flying robots. At South River High School, located in the Annapolis, Md., suburb of Edgewater, a group of upperclassmen is learning how to make and fly quadcopters. The new course, “Introduction to Unmanned Aerial Systems,” is supported financially and materially by Annapolis-based communications and engineering company ARINC. Consider it a shop class for the future.

The students, all male, are organized into four teams of three, each with a modified DJI Flame Wheel quadcopter. When flying, the teammates adopt one of three roles: pilot, who controls the drone; observer, who keeps the drone in eyesight at all times; and safety officer, who informs the others of potential hazards and makes sure safe flying procedures are observed.

The students aren’t just learning how to pilot the drones. When one team wanted to add a camera to their Flame Wheel, they used a 3-D printer to make taller landing gear that could hold the camera.

Rolf Stefani, senior director of ARINC’s Technology Innovation Center, is in the classroom three to four hours a week, alongside technology education teacher Rob Tompkins. Before the Flame Wheel, students learned on a toy drone. Stefani tells Popular Science that the high school is planning some sort of competition for May, though the details are still being figured out. The real impact of the class may come well before any year-end aerial acrobatics: as part of the course, students must submit a business case for drone use. Here’s hoping they avoid the gimmicks.

Watch a brief television segment with the students.