How Students Are Testing Medical Devices For Future Astronauts 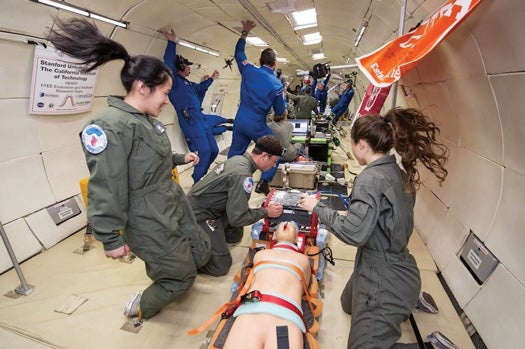 Three Stanford University students float weightless about 30,000 feet above the Gulf of Mexico, as they wiggle a probe into a mannequin’s esophagus and try their best not to vomit. The undergrads hope to learn whether a portable ultrasound machine can take useful images of the heart—in this case, the lifeless heart of a $26,000 dummy—in zero gravity.

The parabolic flight is part of NASA’s so-called Microgravity University, which gives students the opportunity to design experiments that will help determine the future of space flight. Stanford’s ultrasound machine (donated, like the dummy) seems well suited to a trip to Mars. It’s light and compact, requires little medical training to use, and the probe can remain in the body for 72 hours while recording images of the heart. But no one knows whether it would function correctly in space.

The Boeing 727 pulls out of a dive at the bottom of its parabolic arc and begins to climb again. The students slam to the floor, smiling; they got the images they needed. Later, team leader Paul Warren sends two sets—one taken on Earth and one in flight—to a cardiac anesthesiologist, who finds no significant differences. Once more doctors review them, the team hopes to publish their results.

Through Microgravity U., students are tackling the hurdles to space exploration one experiment at a time. “Before we make long-duration space flight a reality,” Warren says, “we need to have the type of medical equipment in emergency rooms on Earth available in space.”

Check out more of our coverage of Microgravity U.’s parabolic flight.