How Reshma Saujani Is Building A Generation Of Girls Who Code

One woman's educational crusade to get girls interested in computer science 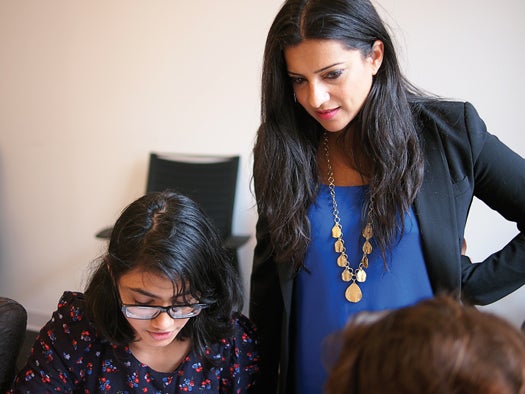 When Reshma Saujani toured New York City schools during her 2010 primary run for Congress, the gender divide in computer-science classrooms shocked her. “I’d be in a robotics lab on the Upper East Side where there would be a hundred boys,” says the politician and lawyer. “And then I’d be in Queens and there’d be one girl in the basement of a church.” With jobs increasingly dependent on computer know-how, Saujani saw girls facing an economic disadvantage—particularly since the number of women earning computer-science bachelor’s degrees has actually dropped by more than a third since the mid-eighties. The key, she decided, was connecting them with computer programming early.

Saujani lost the race, but the coding idea stuck. Within two years she launched Girls Who Code (GWC), a summer program that places female high school students at tech companies, including Facebook, Twitter, and Amazon. Today, GWC has expanded to 19 companies in four cities and the Bay Area, with more planned for 2015; similar programs have followed, including Google’s Made with Code, which launched in June. So far, 95 percent of GWC graduates plan to study computer science in college, compared with less than 1 percent of girls nationally. Saujani points out this isn’t just good news for women, but the industry too. By 2020, the Department of Labor calculates there will be 1 million more computer-science jobs than computer scientists to fill them. Says Saujani: “It is simply the right thing to do.”

20.6: Percentage increase in science and engineering jobs projected between 2008 and 2018, double the overall growth rate