How It Works: The Highest-Efficiency Solar Cell

I'm going to soak up the sun. 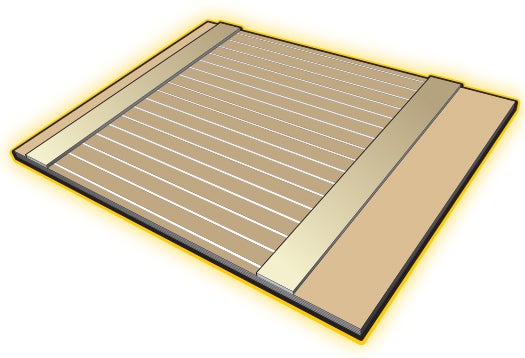 Solar cells typically convert no more than 20 percent of incoming energy into electricity, in part because they capture only certain wavelengths of light. Researchers at Germany’s Fraunhofer Institute for Solar Energy Systems have developed a solar cell that converts 44.7 percent—a new record. It consists of a lens that concentrates sunlight onto four stacked subcells, each designed to absorb a distinct portion of the spectrum. The team estimates it will take them another two to three years to scale up the 5.2-millimeter prototype for use in solar-power plants.

1. Sunlight passes through a multifaceted lens known as a Fresnel. The lens focuses direct sunlight, delivering the power equivalent of 297 suns to the solar cell below.

2. The first subcell, made from gallium indium phosphide, captures photons from the shortest wavelengths of light. The subcells beneath it contain elements capable of capturing progressively longer wavelengths.

3. Each subcell consists of several semiconductor layers, which create an electric field. As photons enter, they excite electrons, freeing them from the subcell.

4. Once the freed electrons reach the top of the stack, a metal contact funnels them toward an output terminal as a direct current.

Continue reading about How It Works: a wiffle ball, a dog, and more

_ This article originally appeared in the April 2014 issue of_ Popular Science.