The 8 Greatest GIFs Of BigDog In Action

Our favorite shambling robotic pack mule has come a long way over the years. 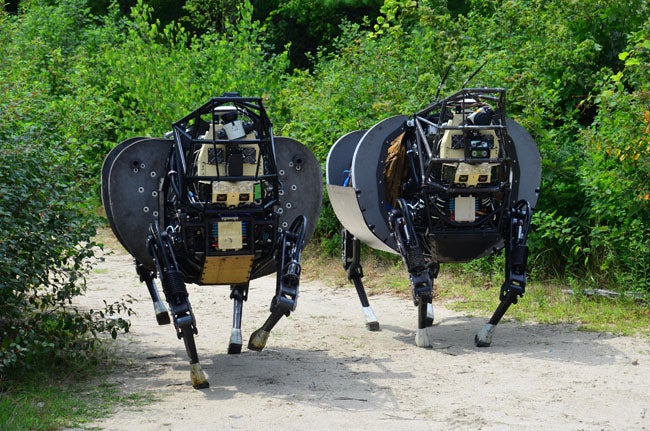 The BigDog family of robots, developed by Boston Dynamics, has come a long way since it was first created in 2005. To celebrate some of the headless robot’s coolest technological achievements, I made these eight GIFs. Enjoy.

Here’s the first time BigDog learned how to throw things. Cinderblocks, specifically, which are less “playing fetch with a ball in the park” and more “that robot is trying to bash in my head.” Nice arm, BigDog!

WildCat is BigDog’s newest sibling. It likes to run really fast, and it recovers quickly when it crashes. WildCat is an evolution of Boston Dynamic’s Cheetah. Aww, it’s like an excited robot puppy.

LS3 (for Legged Squad Support System) is a robot attempting to be a donkey or mule. DARPA is especially interested in this one, which is why has an acronym instead of a cool animal name.

One of the most remarkable things about the original BigDog is its sense of balance, whether recovering from a slip on ice…

…or a mean kick from a human.

Sometimes BigDog has fun! Here it is playing pretend with a person. I would totally go to robot bull fights in the future.

Boston Dynamics took BigDog on a vacation to Thailand, and, like an actual living creature, the robot frolicked in the water. Here is BigDog playing in the surf.

Thanks for eight years of good times, BigDog! Please don’t kill us all.