At Drone Conference, Bots That Bop

The latest in remotely piloted dance moves from the UAV industry's biggest event. 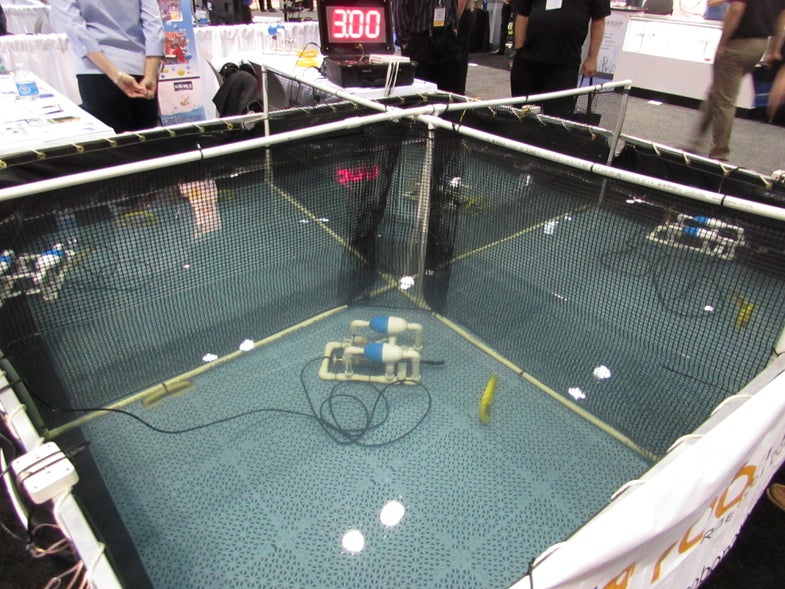 This week in Orlando, Florida, the Association for Unmanned Vehicle Systems International (AUVSI) held a gathering of drone industry people, from manufacturers of parts to autopilot software coders to the big aviation giants themselves. There was a lot to see, and while some of it was just quadcopters, Popular Science managed to catch a few robots in motion.

SeaPerch is a major robotics program and competition aimed at schoolchildren. The classic kit involves an underwater machine assembled from small flotation devices, PVC pipe, and little motors. The basic challenge, after building the robot, is piloting it underwater to successfully hook rings and deliver them to designated drop spots. The machines are tethered, meaning communication between controls and the bot happens along that black wire. Below, our intrepid reporter struggles to move the robot precisely, and instead crashes it into the soft side of the tank.

Made by Roboteam, this Micro Tactical Ground Robot (MTGR) is 18 inches long, 14.5 inches wide, and spent all three days at the convention driving around a teddy bear dressed up as a sailor. It can be used by bomb squads, and can lie flat at under 6 inches in height, making it ideal for crawling through narrow tubes and tunnels. The gripper arm can lift 10 pounds when fully extended, and the forward set of tracks allow it to both climb stairs and strike cool poses.

In The Sky In A Cage

Of course, moves on water and land had nothing compared to the dancing robots in the sky. Quadcopters may be boring on the shelf, but they are just a delight to see flying. The Parrot booth was surrounded by a constant stream of spectators, eager to see the tiny quadcopters dance in formation with each other and in response to the colored patterns on the ground. And what music do robots like to dance to? Daft Punk, of course.