Can You Fix A Machine By Smacking It?

Short answer: Maybe for a while. 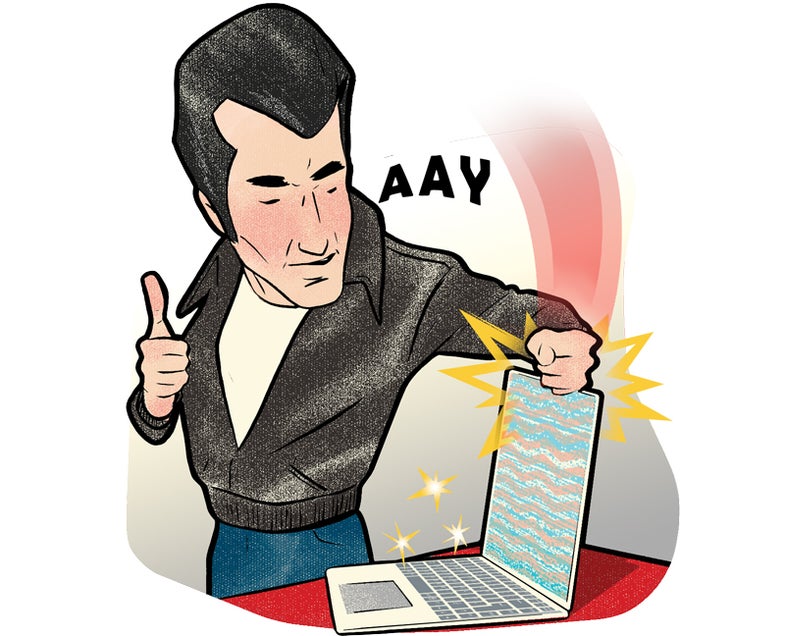 On Happy Days, one of the Fonz’s signature moves was to pound the jukebox to make it work. There’s a certain logic there, says Mack Blakely, executive director of the National Electronics Service Dealers Association. “In the old days, devices had a lot of mechanical stuff in ’em, and you could jar something back in place,” he says. “A solder connection might reconnect, but it probably wouldn’t be long before it would be acting up again.”

That logic still holds with today’s machines. A good smack can temporarily fix an intermittent connection, but it’s risky. Whacking a platter-based hard drive, for example, could damage the head. That’s why “percussive maintenance” is best left to professionals. A few well-placed taps may identify a weak connection on a printed circuit board, says Blakely, who has been an electrical technician for almost 50 years. “The word ‘tap’ is important,” he adds. “It’s not ‘hit;’ it’s ‘tap.’”

The same approach is used in emergency medicine, too. When paramedics apply the “precordial thump” to the chest of a person in cardiac arrest, they’re not unlike old-school repairmen, smacking the heart to start it up. But, as with electronics, many studies say the thump can often do more harm than good.

This article was originally published in the November 2014 issue of Popular Science under the title, “Can you fix a machine by smacking it?”

Ask Us Anything
ask anything
November 2014