Its fate is a glimpse into Earth's own future. 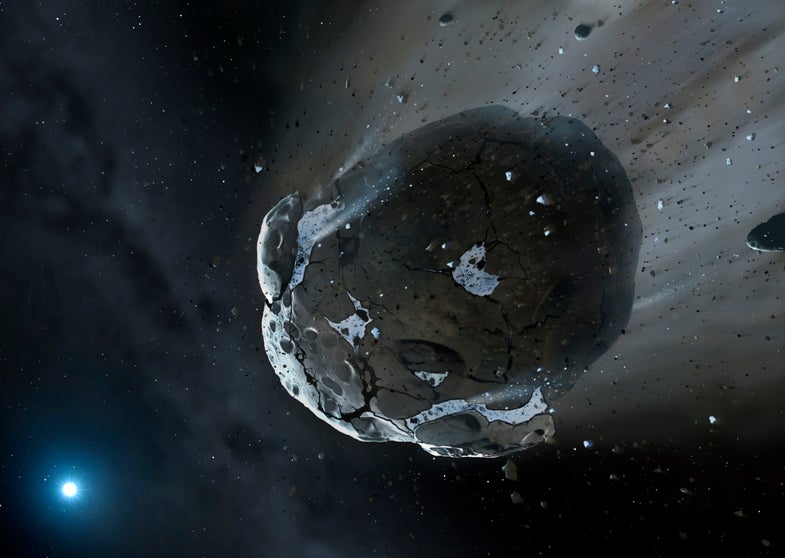 Hello? Is it you I’m looking for? Astronomers have found evidence of a small, rocky planet or asteroid whose mass is up to 26 percent water. Even Earth is only 0.023 percent water, by mass. This is the first time a rocky body with water has been found outside of our own solar system.

“Our results demonstrate that there was definitely potential for habitable planets in this exoplanetary system,” Jay Farihi, an astronomer at Cambridge University and the lead author on the research, said in a statement.

But things aren’t looking good for the watery planet today. It’s now just a bunch of debris orbiting its star, a white dwarf called GD 61. Farihi and his team think that in the past, something—possibly a bigger rocky planet—knocked the watery planet close to GD 61, whose gravity then pulled the little guy apart.

Astronomers from the U.K. and Germany analyzed data from the Hubble Space Telescope to uncover the planet’s chemical makeup. They found evidence of larger amounts of oxygen than could be explained by GD 61’s atmosphere. That extra oxygen must be bound to either water or carbon, Boris Gänsicke, a University of Warwick astronomer who studied the planet, said in a statement. (Oxygen binds to carbon as carbon dioxide.) In this case, Farihi, Gänsicke and their third collaborator, Detlev Koester of the University of Kiel, found very little carbon in GD 61, so they concluded the oxygen must be evidence of water.

GD 61 and its debris also offer a glimpse into Earth’s own future. In six billion years, Earth’s own sun will become a white dwarf, whose gravity will begin pulling in bits of its planets and asteroids.

Farihi and his team published their work today in the journal Science.