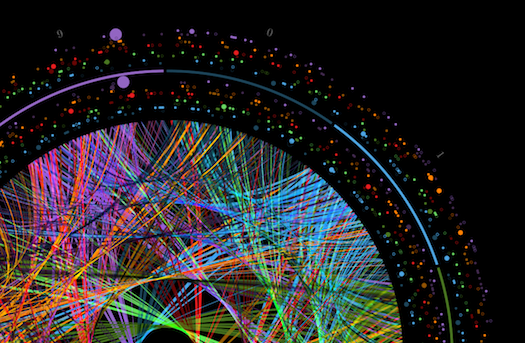 Science artist Martin Krzywinski has turned the infinite randomness pi—and other mathematical constants—into a thing of visual beauty. Krzywinski, building on images created by Cristian Ilies Vasile, has compiled a series of eye-catching circular diagrams based on relationships between the digits in pi, and in the other mathematical constants phi (also known as the “golden ratio”) and e (the base of the natural logarithm).

The original image by Crisitian Ilies Vasile used a circos diagram, a format developed by Krzywinski for genetics visualizations. In his version, Krzywinski uses color pairs from a Brewer palette, which are designed for maximum readibility.

Inside a circle divided into 10 segments—representing the numbers zero to nine—each digit of pi links to the the next with a line. Krzywinski added an outer layer to Vasile’s illustration. He measures how frequently one digit follows another. For example, in a sequence like 2739452781, the transition 2 to 7 occurs twice. Krzywinski uses bubbles to represent these transitions: the larger the dot, the more times a sequence occurs.

In this piece, Krzywinski shows the transition counts for the first 2,000 digits of all three constants: pi on the outside, phi in the middle, and e on the inside. Two of the bubbles—lime green in the upper left—really pop out, and Krzywinski explains there is a sequence of six consecutive 9s starting at the 762nd digit of pi—and six 9-to-9 transitions make for a big transition-count bubble. That sequence, by the way, occurrs almost 70,000 places earlier than chance would predict.

Here, Krzywinski simply arranges the color-coded numbers of pi into Archimedean circles to create a mesmerizing effect. Each dot represents a digit, running from red at zero to blue at nine. The 3.14159 starts at the center and spirals outward for 13,688 decimal places.

Krzywinski says he doesn’t care much for numbers’ hidden meanings, but that he does have a mathematical curiosity.

The images are arresting and whimsical, but it’s not easy to tell how Krzywinski’s rules work—although that does make learning about his methods and finding the patterns more rewarding.