The skeleton represents "perhaps the best-preserved remains of an ancient human uncovered in the past 40 years." 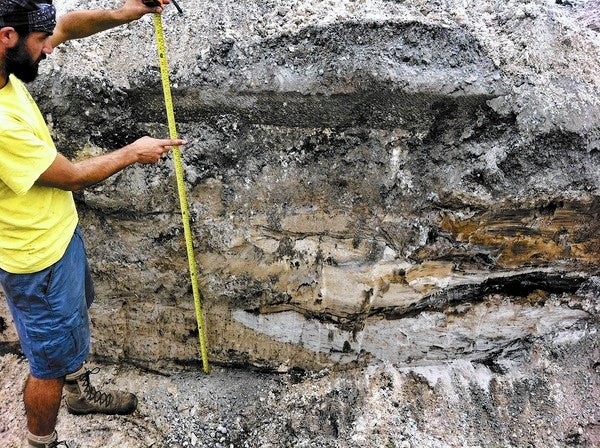 FL-ANCIENT-SKELETON-FOUND- Workers show the location along Pine Island Road, where archaeologists discovered the body of a 2,000 year old skeleton just before Christmas. Handout photo provided by: the Archaeological and Historical Conservancy, Inc.
SHARE

In the process of installing a waterline in Davie, Fla., construction crews happened upon a 2,000-year-old, fully-intact skeleton. The bones are thought to be those of a Tequesta Indian woman and according to South Florida’s Sun-Sentinel are “perhaps the best-preserved remains of an ancient human uncovered in the past 40 years, authorities said.” (Presumably they are only comparing it to other remains found in the region, not the whole world.) The Sun-Sentinel continues:

“It’s either Tequesta or the member of a people that predates the Tequesta,” said Bob Carr, of the Archaeological and Historical Conservancy in Davie. “It’s unusually well preserved, considering it’s been under a highway with thousands and thousands of cars going over it every day.”

The woman, about 5 feet tall and about 20 to 30 years old, will now be analyzed by state and local archaeological authorities and then reburied in about a month in a secret location, with Seminole and Miccosukee Indians conducting the ceremony. No artifacts were found with the skeleton, and it had no distinguishing marks to indicate how she died. “There’s nothing in the bones to indicate trauma,” Carr said.

The analysis will not include DNA or radiocarbon dating, as these would require destruction of bone material, something the current-day Florida tribes are opposed to, the paper reported. There will also be no photos forthcoming:

After the skeleton was unearthed, Seminole and Miccosukee Indian officials requested the discovery remain quiet until Thursday [Jan. 9] and insisted no photos be taken of it.

“This is fairly standard protocol,” said Gary Bitner, whose public relations firm represents the Seminole Tribe of Florida. “It’s done with an obvious respect for the remains.”

Because of a state requirement that all construction sites must be surveyed to ensure no historical objects are destroyed, Carr and other archaeologists have found numerous bones and artifacts. But finding full skeletons is relatively rare.

For the full story, hop on over to the Sun-Sentinel.