The technique could soon power implants in humans. 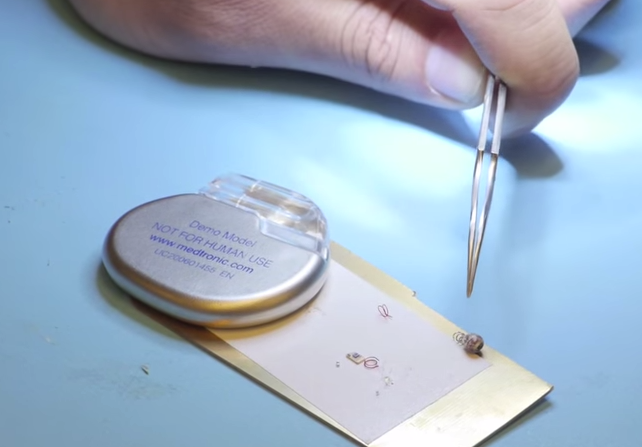 Scientists have implanted a tiny pacemaker in a rabbit and wirelessly powered it to regulate the animal’s heart beat. It’s the first time such a device has been powered this way in a living animal, suggesting that the same technique could run pacemakers or other devices in humans. This would be huge, because now pacemakers and other devices have to be removed and re-installed when they run out of batteries, involving risky surgeries.

Without needing bulky batteries, the devices could also become much smaller–the size of a grain of rice, as in the case of this pacemaker. It’s further described in a video below from Stanford University, where study author Ada Poon hails.

The pacemaker was powered by a cellphone battery within a metal plate, held about an inch above the animal’s chest. It works by inducing power, with electromagnetic waves, in an energy harvesting coil in the pacemaker, as New Scientist explains:

It remains to be seen if this would be feasible or healthy for larger devices (which would presumably require more powerful transmitters), or for use in humans, although the scientists claim the electromagnetic waves don’t harm the animals–and they are bullish about human applications in the near future.