Ticks That Can Make People Severely Allergic To Meat Are Spreading In The U.S.

Interviews with doctors suggest the Lone Star tick, and the allergy to sugars in red meat that it can cause, is on the rise. 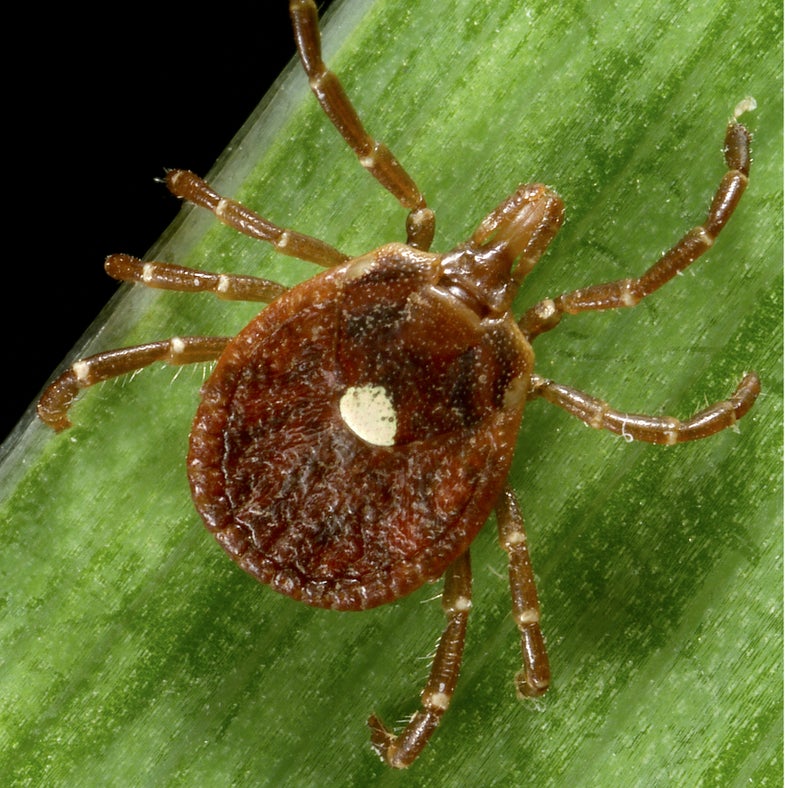 Mike Abley will always remember the last hamburger he ever ate. It was more than 20 years ago, and he recalls the meat being particularly juicy and delicious.

But a few hours after dinner, Abley started itching like mad. He burst into hives, his tongue swelled, and he eventually passed out, prompting his wife to call 911. At the hospital, doctors determined he had gone into anaphylactic shock—a potentially deadly allergic reaction.

Fortunately, Abley pulled through, and he later met with an allergist to determine what had caused the terrifying episode. A series of tests revealed something strange: The hamburger had triggered the reaction. And it wasn’t just the beef he was allergic to; it was practically all red meat.

“I’ve always said I think it’s karma,” says Abley, now 73, a lifetime resident of Virginia. “My family have been cattle ranchers for generations.”

Abley is one of at least 1,500 people in the United States who suffer allergic reactions after eating meat, and doctors interviewed by Popular Science believe such cases are on the rise. But what’s even more bizarre is the source of the allergy. The condition, called alpha-gal allergy, is caused by the bite of a Lone Star tick—a species traditionally found mostly in the Southern United States but has spread farther north in recent years.

And as the tick spreads, more and more cases of meat allergies are being reported. In one area of Long Island, New York, for example, one doctor we spoke with has seen an increase of 200 cases in the past three years—up from practically zero in 2011.

The connection between Lone Star ticks and meat allergies in America first came to light in 2008. At the time, Thomas Platts-Mills and Scott Commins, both allergy specialists at the University of Virginia Health System, were trying to understand why some of their patients had developed a severe allergic reactions to cetuximab, an intravenous cancer-fighting drug. The doctors eventually learned that Immunoglobulin E (IgE) antibodies in their patients were reacting with a sugar in the drug called alpha-gal. It was peculiar, since nearly everyone produces these antibodies, but not every patient reacted poorly to the drug.

Commins and Platts-Mills discovered these strange reactions occurred in patients who all hailed from the same place: the southeastern United States. So a lab technician Googled for medical conditions that fit geographically with the allergy they were seeing. Sure enough, they found that Rocky Mountain Spotted Fever—a tickborne disease—affected the same areas.

“We went back to our patients and started asking them about ticks,” says Commins, who, along with Platts-Mills, published their findings in 2008 in The New England Journal of Medicine. “It became clear over a series of months that this tick theory fit better than anything else we could find.”

“I’ve always said I think it’s karma, because my family have been cattle ranchers for generations.”

Around the same time, more and more healthy patients began reporting meat allergies (one of them being Abley). The symptoms began three to four hours after eating meals that contained beef or pork. Like the patients allergic to cetuximab, these patients were also predominantly from the Southeast, a region crawling with ticks. It didn’t take long for Platts-Mills and Commins to figure out the allergies were connected—and that the link was alpha-gal sugar.

Alpha-gal is a major component of cetuximab, but it’s also found in a far more common, natural source: non-primate mammals such as pigs, sheep, and cows. Humans don’t make the sugar, and we all have some form of immune response to it. In fact, alpha-gal is the main barrier preventing cross-species organ transplants; the sugar, found in the animals’ organ tissues, triggers rejection in humans.

Yet most people have no biological reaction to eating livestock, which makes the tickborne meat allergy so surprising. Moreover, the patients of Commins and Platts-Mills weren’t born with the condition, and they reportedly showed symptoms much later in life—a unique trait for an allergy.

So the doctors finally asked the question they’d wanted to since discovering a potential connection: Are ticks actually causing this alpha-gal allergy? In a series of revealing experiments, they sampled blood from their patients with meat allergies and combined them with various tick extracts. They discovered that the IgE antibodies in their patients’ blood samples binded to the Lone Star tick extract; meanwhile, the same antibodies from people without the meat allergy did not glom onto the tick proteins. So in some way, these tick bites could manipulate people’s immune systems, changing the IgE response.

Despite identifying the vessel for the mysterious meat allergy, Commins and Platts-Mills​ say many questions remain unanswered about the condition.

“How do does the tick induce this IgE response, essentially breaking tolerance, and why does it take four hours for symptoms to show?” says Platts-Mills. One hypothesis has to do with fat absorption in the body, which takes approximately two hours. Whatever the case, he says “those two questions will keep us occupied for a long time.” It’s also uncertain if all Lone Star ticks carry some factor that causes the condition, or if only some do (as is the case with Lyme disease, which is caused by a bacterium).

As Commins and Platts-Mills struggle to understand the mechanisms behind this allergy, the number of cases they’re seeing is trending upward—and the allergy is no longer confined to the South. Dr. Erin McGintee, an allergist on New York’s Long Island who’s worked with the UVA team, has diagnosed approximately 200 cases of this allergy in the area she works. She thinks wild turkeys may be to blame; they were reintroduced to Long Island a couple of years ago for hunting enthusiasts, and the birds may have carried the Lone Star tick with them. A rising deer population may also explain the tick’s spread, as they are also big carriers of the parasites.

Whatever the cause, McGintee expects to see more cases in the future: “I don’t think it’s a nationwide epidemic, but as the Lone Star tick geographical distribution increases, I think it’s going to be a regional epidemic in many areas.”

“I think it’s going to be a regional epidemic in many areas.”

Meanwhile, many of the meat allergy sufferers have had to adjust to a new normal. Abley initially refused to accept his diagnosis, experimenting with different meats to see if he could tolerate them. He tried pork and lamb, but both caused reactions. He finally narrowed down his list of acceptable meats to chicken and seafood, but all others he had to avoid consistently, lest he wind up in the hospital.

So he decided to become a vegetarian, for the most part—not by choice, but to save his life. Now, whenever Abley and his wife go out to eat, he must be very forthright with his waiters: His food can’t contain red meat of any kind, or he could have another attack. Even foods like JELL-O are off the table, because they contain gelatin, which is made from meat byproducts.

“It’s been really, really difficult ’cause I am a meat eater,” says Abley. “Fortunately I live in an area where seafood is plentiful. But I love beef and I love pork, so I missed it for years.”

However, there is a spot of good news for those who fall prey to the Lone Star tick’s bite. The effects seem to be temporary, lasting a few months or a few years—as long as you don’t get bit again. For Abley, that’s not really an option, given his location, but he says the pros outweigh the cons.

“It’s possible that if we move some place where I didn’t get tick bites, I could eventually get over this. But I live on a small farm in the middle of the woods in Surry County, Virginia, and I’d rather have the allergy than leave that.”