Are some people just better at becoming fluent in new languages as adults? 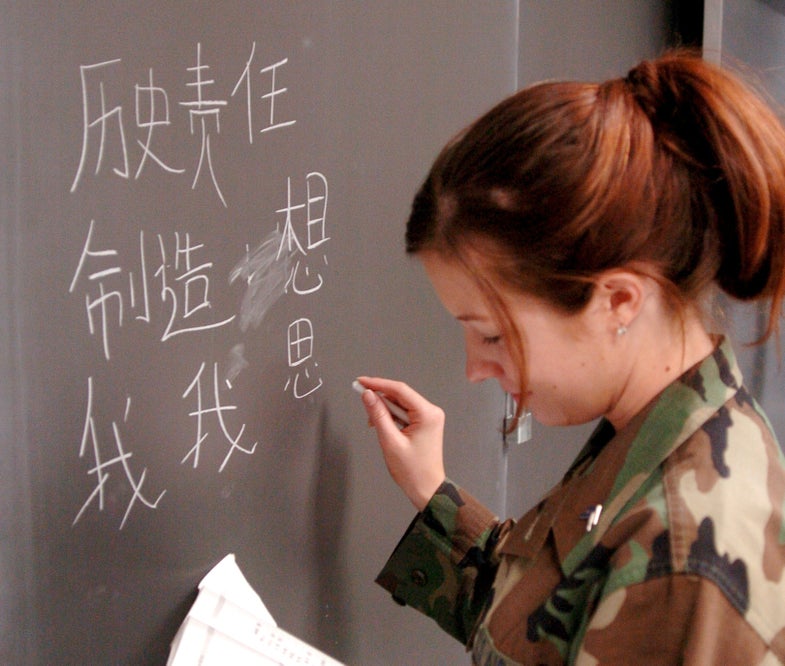 A U.S. Air Force Academy cadet at the board in Chinese class. U.S. Department of Defense
SHARE

Until recently, it’s been used exclusively in U.S. government agencies and military schools. But now, a test for how easily a person will become fluent in a foreign language could be made available for civilians. Nautilus calls the test “one of the first civilian benefits to come out of America’s war on terror.”

Nautilus looks at some of the science—and yet-unproven theory—behind the test, called the High Level Language Aptitude Battery, or Hi-LAB. In short, some of the latest thinking posits that some people have better brain hardware for reaching high-level fluency in another language as an adult. You’ve probably heard a lot about how the brain is primed for learning languages in childhood. There’s even evidence that a pill could induce that childlike learning state in adult brains. The Hi-LAB researchers found, however, that certain adults naturally seem to learn language similarly to the way kids do. Hi-LAB is designed to find those adults.

The U.S. military got especially interested in this research after 9/11. Suddenly, military leaders found themselves in dire need of translators for languages quite unlike English, such as Arabic and Pashto. They wanted to train American translators quickly and they didn’t want to waste time on people who were never gonna get there.

Now, the military and Hi-LAB’s creators have released details about the test to the public for the first time, Nautilus reports. Outside of the military, Hi-LAB could pinpoint different adults’ optimal language learning strategies. You could get language lessons tailored just for your brain… whether or not you have the architecture to make you so fluent, your government would want you translating intercepted terrorist messages. But will it work? Even in the military, it’s still too soon to know whether Hi-LAB has helped the American government find and nurture the best adult language learners, Nautilus reports.