The words you use on social media today paint a history of language that's centuries-old. 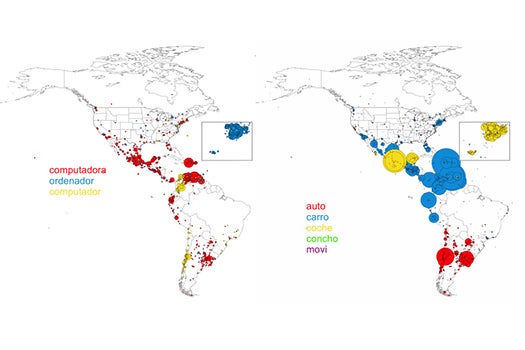 Dialects say much more than where a person is from. They are also rife with information that can reveal a whole history behind a person’s culture. A new study suggests your own cultural history might be talking through your tweets and other social media posts.

Linguistics researchers from France and Spain collected all tweets written in Spanish over the last two years – around 50 million in total. Each tweet’s dialect was determined through word variations that are specific to certain regional dialects. For example, the word car in Spanish can be auto, automóvil, carro, coche, concho, or movi; each is more common in certain dialects than others.

Reserachers geographically mapped the dialect distribution of the tweets, and found a surprise. Spanish dialects can be organized in two major groups the authors call “superdialects”. The first is predominant to major Spanish and American cities across the world, which the authors attribute to language homogenization caused by increased globalization. The Internet has greatly sped up this phenomenon.

But it’s the other superdialect, almost exclusive to rural communities, that has bigger implications. The authors say it reflects the settlement patterns of Spanish immigrants hundreds of years ago, indicating how settlers to the New World moved and established colonies. In this sense, tools like Twitter and Facebook — new to the 21st century — might help illustrate patterns in cultural history that could very well be thousands of years old.

This certainly isn’t the first time researchers have crowdsourced data through social media. Twitter has a knack for tracking public health trends, and can even predict the spread of illnesses. And of course the way social media shapes our thoughts and emotions is a field of study itself (even over the objections of many).