Stressing Out About Staying Calm

The challenges of using a headband that reads your brain waves 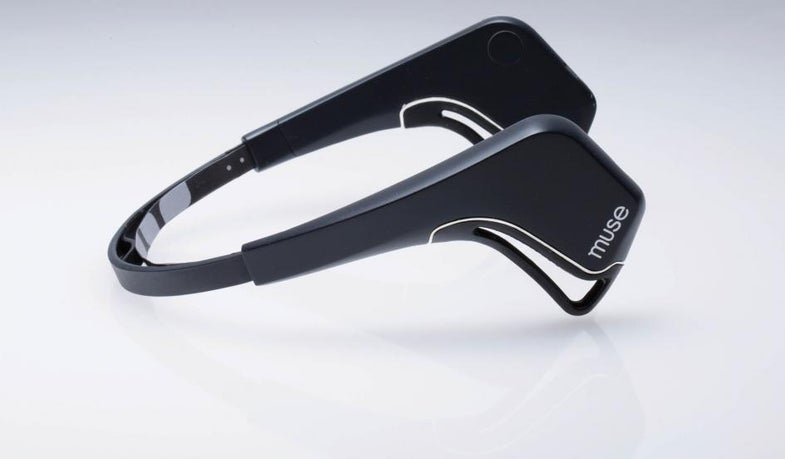 When I was in college, I participated in as many research studies as I could. It was easy money, so I gladly sat at computers and answered survey questions and allowed research assistants to cover my head in a net of EEG sensors and goop that glommed on to my hair. Sometimes I would fall asleep. (They put me in a dark enclosure and had me sit in a comfy chair, maybe that was what they wanted?) But during the EEG (electroencephalography) studies in particular, I would be so distracted by what the researchers might see in my brain waves that I often failed to perform the tasks they were trying to monitor.

When I went to try out Muse, the new brain-sensing headband created by InteraXon, I had forgotten the feeling of someone monitoring something I had little control over—my brain activity.

Muse uses a similar EEG technology to monitor your brain activity–thankfully, without any of the goop. It’s designed for daily use, either to calm down after a stressful day at work, or even as a brain break during a particularly tense moment. During a particularly busy Wednesday afternoon, I headed over to a loft space in Manhattan to try it out for my anxious self.

Before I struggled to correctly position the headband, I thought, or maybe just hoped, Muse could work magic and calm me down.

After some help from the PR representative, my brain waves were plugged in and I then used headphones to listen to the app—aptly named Calm—tell me to get in a comfortable position, but sit up straight and relax my shoulders. For the first minute or so, the app needed to calibrate the seven EEG sensors embedded in the headband. I was prompted to think of actors. Immediately, I panicked. No names came to my head. All that would inexplicably flash in my mind was the opening credits of the TV show Friends. Then, Brad Pitt. Then, Jillian Anderson. I sat there thinking about how I couldn’t think of any actors’ names. Then I was prompted to think of TV shows. A similar string of thoughts ensued. And finally, I was told to think of shapes. I wasn’t sure if I was supposed to think of the actual shapes or the names of shapes, but I wanted to do the right thing. “Rhombus” repeated over and over in my mind.

Once I had performed mental gymnastics to just come up with a word or two, the app gave me a break. A soothing woman’s voice (truthfully, it was the same voice as before, but this time she was just telling me to focus on my breathing) spoke minimally over the sounds of crashing waves. I counted each exhalation, as I was told. 1, 2, 3, 4 . . .

Before long, my mind wandered. I realized my brain was trying to take note of everything I was experiencing so that I could write this post. I was thinking about when I shook hands with Ariel Garten, the CEO of InteraXon, and how her blue-grey eyes were piercing, yet calming. I was thinking about how I should stop thinking about all of this because the headband I was wearing was picking up all of my brain activity (though as the company notes, Muse can not read your thoughts).

Once the waves ceased, and my three minutes of calm were up, I saw the graph my brain activity produced. Midlly jagged lines showed a calmer mindset than I expected and the next screen showed a number of points I earned, which meant little to me. The PR representative came over and explained that if you were really calm, you could hear a bird landing. I did not get any bird landings.

I don’t know what I imagined Muse would actually do, but I expected it would somehow use the brain wave data to force a sense of calm into my mind. It was a silly assumption, yes. Mostly, I came away feeling confused. The gamification of calm made me put effort into clearing my mind. For example, if you reach a certain level, you might unlock a new set of background sounds (forests). This might work for some users, but for me, worrying about not reaching the highest possible state of zen is a little counter-intuitive.