When researchers pulled their seaglider out of the Atlantic, they discovered evidence of a tentacular embrace. 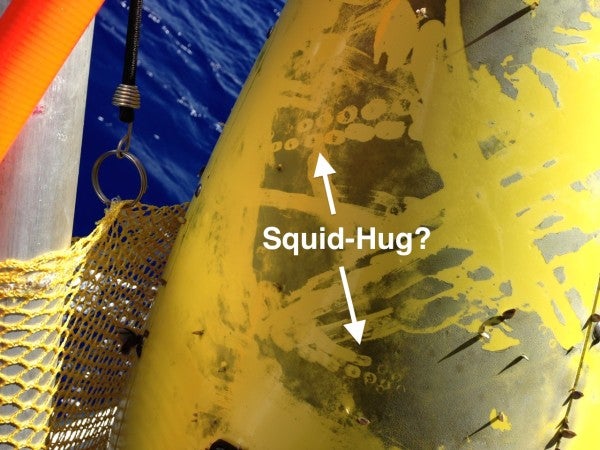 Marine science blog-with-attitude Deep Sea News made note last week of a critter-‘bot encounter: A seaglider—an automated underwater vehicle that collects data on the ocean’s temperature, salinity and pressure—was pulled out of the mid-Atlantic bearing multiple sets of double-rowed circles etched into an unusual coating of grime.

These are sucker marks, signs that a squid wrapped the glider in its tentacular embrace (“the standard way that squids investigate items of interest” notes DSN). The dirt may be remnants of squid ink.

It’s impossible to know whether the squid considered the seaglider a friend, snack, or foe, although that doesn’t stop DSN from wondering, “perhaps it was love at first tentacle?”

The glider was being operated by SPURS, the Salinity Processes in the Upper Ocean Regional Study, a joint project of NASA Jet Propulsion Laboratory and the California Institute of Technology to better understand the global water cycle over the oceans, and how it is connected to climate.