Sponges Can Sneeze, May Have New Sensory Organ 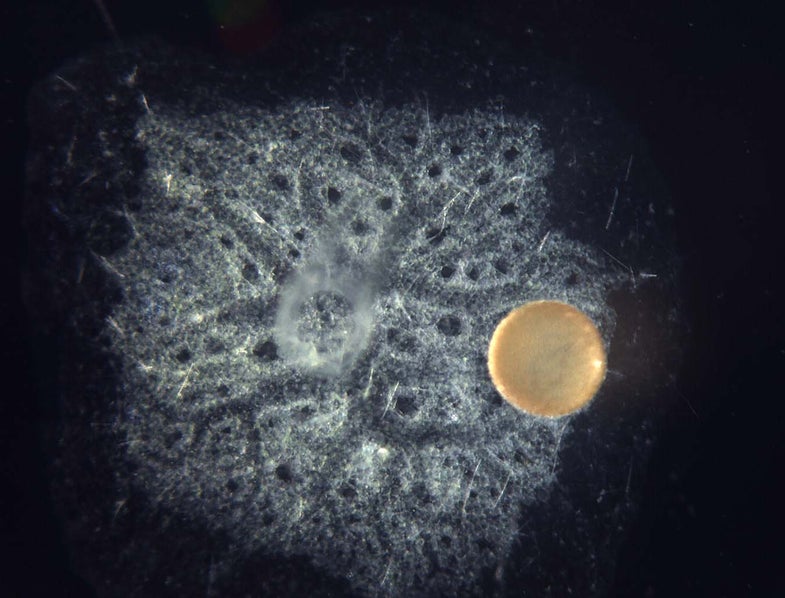 I don’t know if you were aware, but sponges sneeze. That’s a surprise, since sneezes result when nerve cells sense the presence of some sort of irritating, foreign particle. But sponges, one of the earliest evolving animals, aren’t thought to possess a single sensory cell.

That appears to be wrong.

“The sponge doesn’t have a nervous system, so how can it respond to the environment with a sneeze the way another animal that does have a nervous system can?” asks Danielle Ludeman, a doctoral student in evolutionary biology at the University of Alberta, an co-author of a study describing the sponge-sneezes.

The answer, researchers suggest, is that sponges likely do have sensory cells, detecting irritants and drugs with their finger-like cilia, and use this information to contract and expel water. And that’s nothing to sneeze at. “For a sponge to have a sensory organ is totally new,” said Ludeman’s advisor Sally Leys, in a statement. “This does not appear in a textbook; this doesn’t appear in someone’s concept of what sponges are permitted to have.”

In the study, the researchers demonstrated that cilia line the osculum, the central chamber where sponges get rid of wastes. This osculum, they write, may function as a sensory organ. Unlike the human variety, sponge-sneezes take about 30 to 45 minutes, during which time the sponges contract to expel water and then expand.

“This is a very exciting and comprehensive study that clearly demonstrates that sponges are more sophisticated,” Gert Wörheide, a sponge-evolution expert from Germany’s Ludwig-Maximilians University, told National Geographic.