This Spinning Disk Can Detect Salmonella In 30 Minutes

Much faster than previous tests 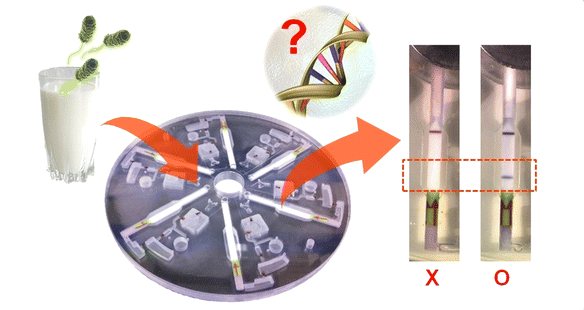 Researchers have created a spinning disk that can quickly tell–within 30 minutes–if food samples contain Salmonella. The most widely-used method to test for the pathogen involves growing out samples on petri dishes and can take days so this has potential to be much quicker and cheaper, according to Chemical and Engineering News. Salmonella enteritidis, as its known, causes an estimated 1.2 million illnesses and 450 deaths in the U.S. each year.

The device, described in a paper published in Analytical Chemistry, contains six channels branching off from a central groove, where food samples are placed. As the device spins, the fluid is forced outward, traveling through small channels. Any bacteria is first concentrated on beads, which are coated with antibodies that bind to Salmonella. Cells are then broken apart with a laser, and DNA is amplified using primer specific to the bacteria. Then, C&EN explains:

The DNA enters a channel containing… reagents and a sensor strip. As the DNA migrates up the strip, it hits a detection area, where the reagents mixed with the DNA cause a visible band of color to form. The researchers found they could detect as few as 100 colony-forming units of Salmonella in milk and 10 in buffer.

And voilà! You can tell whether or not you need to worry about Salmonella.

In a semi-related note, the risk of getting Salmonella poisoning from raw eggs is probably much lower than you thought.