The muscles also fluoresce when they contract. 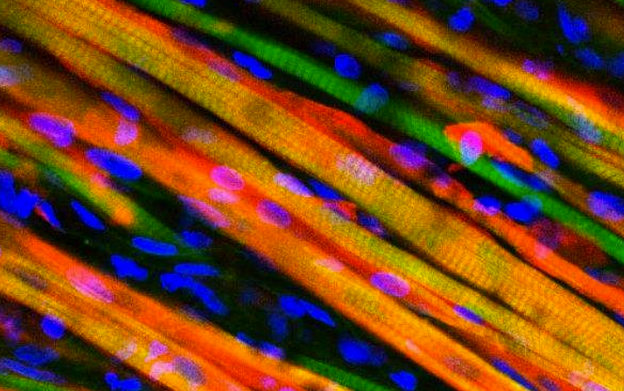 No this isn’t a joke, etc.: Scientists have grown working muscle fibers in the lab that they were then able to successfully implant into mice. Even better, the muscles can repair themselves, which is a significant step in tissue engineering.

To make the muscles as responsive and strong as the real thing, they created little gaps in the fibers where muscle stem cells could grow. This also allowed them to heal themselves, as Alan Boyle explained at NBC News:

In a separate test, the muscles where inserted onto the backs of living mice, under a glass panel. They were engineered to fluoresce when they contracted, as NBC reported. This allowed researchers to see the flashes grow stronger as the muscles grew, as can be seen in the video below.

“A number of researchers have ‘grown’ muscles in the laboratory and shown that they can behave in similar ways to that seen in the human body,” said Mark Lewis, an expert in skeletal muscle tissue engineering at Loughborough University, who wasn’t involved in the study. “However, transplantation of these grown muscles into a living creature, which continue to function as if they were native muscle has been taken to the next level by the current work.”