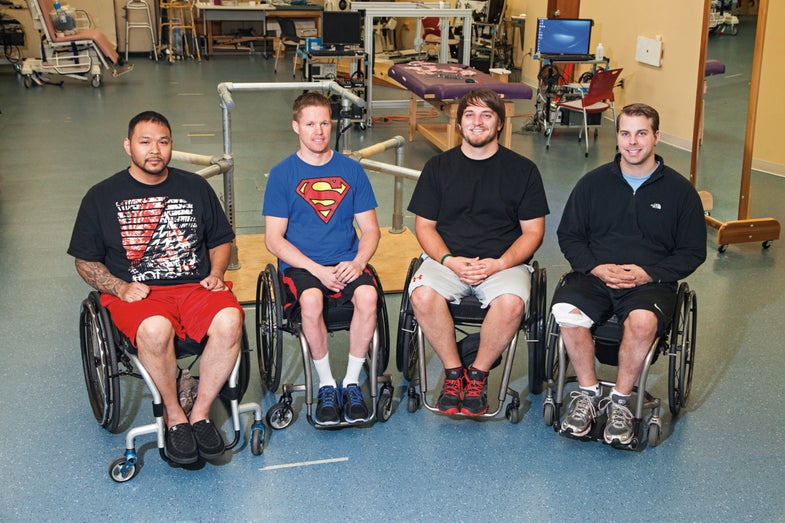 Andrew Meas, Dustin Shillcox, Kent Stephenson and Rob Summers in the University of Louisville lab where they get specialized training to work with electrical stimulation to move parts of their bodies below their spinal cord injuries. Christopher & Dana Reeve Foundation
SHARE

More than 30 people who have been paralyzed by spinal-cord injuries could soon get an experimental treatment that involves sending electric currents to their spines. The Christopher and Dana Reeve Foundation is raising funds to add volunteers to an ongoing study of the treatment.

The treatment took a strong step forward recently, when the study’s scientists published a paper showing that electrically stimulating the spinal cord, alongside intense physical therapy, helped four completely paralyzed young men to move again. Whenever the men visited the lab and had their electrode implants turned on, they were able to move their legs, knees, ankles, and toes on their own. The men also reported they had improved bladder and sexual function after starting the electrical stimulation therapy — important components to their quality of life.

Researchers are now seeking to expand the study to 36 additional volunteers, whom they’ll follow for five years. The scientists “need to test more patients that will be a little more diverse to get a better idea of who will be responsive,” lead researcher Reggie Edgerton of UCLA wrote to Popular Science in an email. The current participants are active men in their early 30s or younger. Edgerton and his team want to test study participants who are older, as well as women. The team remains focused on people who have a complete paralysis diagnosis and have been paralyzed for a year or more.

“There are more volunteers than we can accommodate,” Edgerton says.

The study has no trouble recruiting participants. “There are more volunteers than we can accommodate,” Edgerton says.

What’s happening now is that the Reeve Foundation is seeking donations for the research at its website, ReeveBigIdea.org. Matthew Reeve, actor Christopher Reeve’s son, visited New York City Comic Con last week to talk about his famous father and about the foundation’s work. Christopher Reeve became paralyzed after a horse riding accident in 1995 and died 10 years ago on October 10.

“My father used to say that nothing of consequence happens unless people get behind an idea and they share that idea with others and eventually it becomes a movement,” Matthew Reeve told Popular Science in a phone call before Comic Con. “We want to rally everyone in the community and beyond.”