Researchers Find A Gene For Obesity

Just what we always wanted: a empirical reason why we binge-eat that isn't our fault. 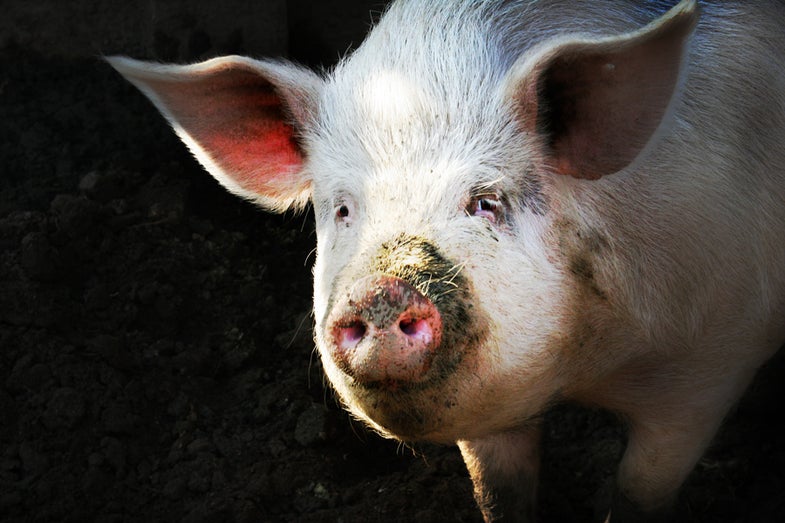 Researchers at the University of Copenhagen set out on what seemed like a simple task: to find out if overeating is linked to any genetic difference. Four years and 1,200 pigs later (yeah, we’ll get to that), they have an answer.

Monitoring human eating habits is highly difficult; over a period of years, no human would be willing to have every single item of food they eat be studied and recorded by scientists. So these researchers turned to the pig, which has a very similar gastrointestinal system as well as a similar genomic structure, to find out. Pigs, after all, don’t much care whether you’re looking at them and taking notes as they eat.

Over four years, 1,200 pigs were given nearly unlimited access to food to see how much they’d eat, how often, how long they’d spend at the feeder, and what kind of food they preferred, all while monitoring their weight. Each pig also had its specific genome sequenced–that means that each pig’s DNA was mapped, creating a sort of personal snapshot of each pig. No two pig’s sequences are completely the same, and the hope was that the differences could shine light on eating habits.

Though all the pigs were of the same breed, some of them were inclined to overeat. And amazingly, the researchers found that specific genes were linked to systemic overeating. Here’s a quote from the researchers:

The researchers also found that these genes are, at least to a point, inherited; a pig was more likely to demonstrate the overeating gene if its parents also demonstrated it. We should mention here that there’s a difference between overeating and obesity; obesity is caused by all kinds of different factors, only one of which is overeating. The researchers do not seem to have investigated these other causes (which include lifestyle, level of fitness, and various diseases).

The breakthrough could mean that people can find out if they are genetically susceptible to overeating, with a simple blood test. That could be valuable for those who want to be aware of exactly how their body works and how to get the most out of it–or it could be sort of terrifying, if, say, health insurance companies can get ahold of that information. For their part, the researchers are going to continue to pursue the research, which lead researcher Haja Kadarmideen thinks could allow people to “be more understanding and helpful and encourage lifestyle and behavioral changes to offset the actions of these potential obesity genes.”

Read more over at the University of Copenhagen’s site.