The Predatory Dance Of The Tiger Beetle

A new study reveals how the beetle's erratic movements are a deliberate hunting strategy. 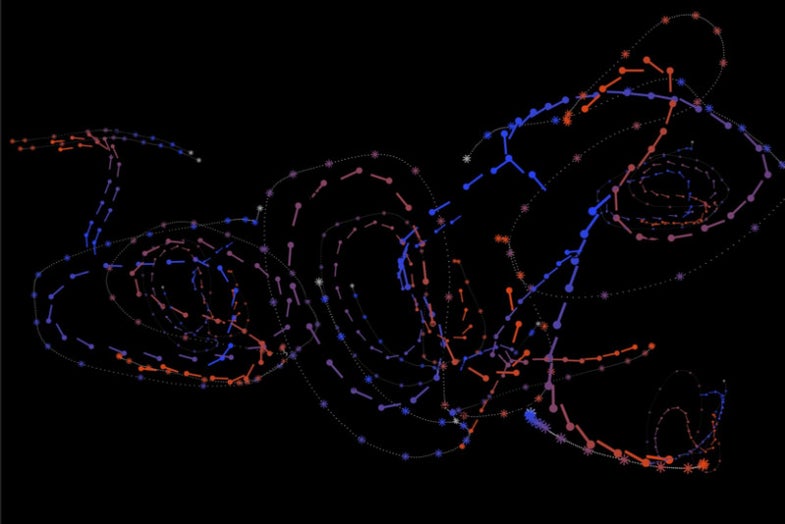 Tiger beetles are aggressive hunters that sometimes run so fast their eyes stop working until they pause again. This combination of sprinting and resting means the tiger beetle must use clever pursuit trajectories to intercept its prey.

“Tiger beetles pursue prey using a proportional control law with a delay of one half-stride,” says a new paper by Andreas F. Haselsteiner, Cole Gilbert, and Z. Jane Wang. The researchers analyzed the chase strategy of the insects and found that the beetles are constantly readjusting themselves to intersect their meals’ projected path. 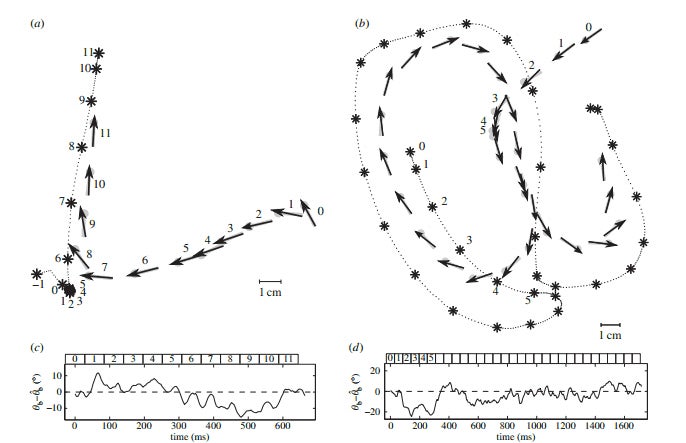 The graphs on the bottom show deviation from stride over time, which wobbles around the clear trajectory.

The above chart is made from recorded pursuits. The pursuit is broken into two parts: the prey (in this case a bead dangled on a string by scientists) is represented by spiked circles and dotted lines. The tiger beetle is shown as the arrows, pointed in the just the right direction to intercept the prey. Both paths show the beetle running toward the bead head-on and then adjusting when the bead starts to flee.

Tiger beetles’ eyesight isn’t stellar (they are, after all, fooled into chasing beads), but it’s a key part of how they hunt. According to the paper, the beetles adjust their pursuit based on seeing where the prey was a half-stride ago. Since the beetles are so fast, this adjustment, made enough times in a high-speed chase, enables them to reliably catch and enjoy their tiny, tasty, fleeing morsels. Or angrily curse at the scientists for fooling them with beads, as the case may be.