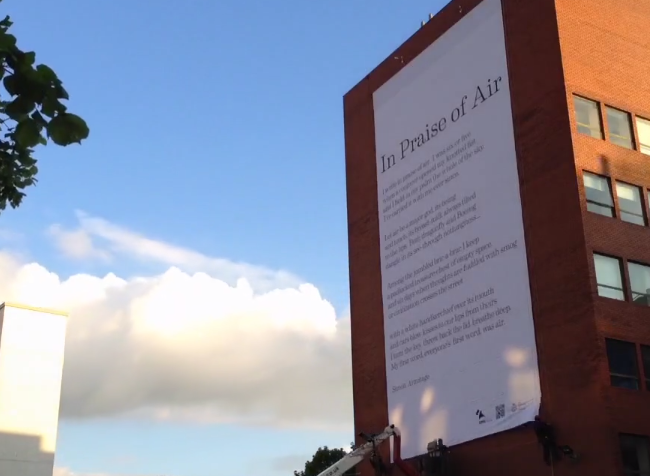 Let air be a major god, its being
and touch, its breast-milk always tilted
to the lips. Both dragonfly and Boeing
dangle in its see-through nothingness…

These words, from a poem called “In Praise of Air” by Simon Armitage, adorn a 33- by 66-foot billboard in Sheffield, England. But this is no ordinary billboard. It contains small nanoparticles of titanium dioxide, which scrub nitrogen dioxide from the air, causing the gas to react with oxygen to form harmless nitrates. The University of Sheffield, which organized the project, said the billboard can remove the nitrogen pollution that 20 cars produce everyday.

“This is a fun collaboration between science and the arts to highlight a very serious issue of poor air quality in our towns and cities,” said Tony Ryan, a researcher at the university involved in the project.

Now, if we can put up the complete works of Shakespeare in every town…