People Will Pay Twice As Much For An Artfully Composed Salad

Same salad, only one is prettier. It makes a big difference. Which would you prefer–a neatly arranged but ordinary salad, or one that looks like an abstract art painting? (Surely it depends, I hear you say–I’d eat Kandinsky, but don’t trifle me with Picasso.) It may sounds like a strange question, but chefs (and scientists) have known for some time that tastes can be accentuated by certain visual cues–for example, bright red drinks appear to taste sweeter, even when they aren’t. But some experimental psychologists from Oxford decided to take it to the next level, and designed an experiment to see how much difference an artful presentation of salad made to diners.

The short answer: it made a big difference. The scientists presented 60 dinners with three different salads: one that resembled Wassily Kandinsky’s Painting No. 201, one in which vegetables were lined up in neat rows, and another was arranged in a normal salad-heap. Diners rated the Kandinsky salad as 18 percent better than the other two, and they said they’d be willing to pay twice as much for it–before and after tasting it.

As the scientists write in the study, which was published this month in the journal Flavour:

Besides presentation and design, many other factors can affect the perceived taste of food, such as color, the language used to describe it, and even the utensils one uses. 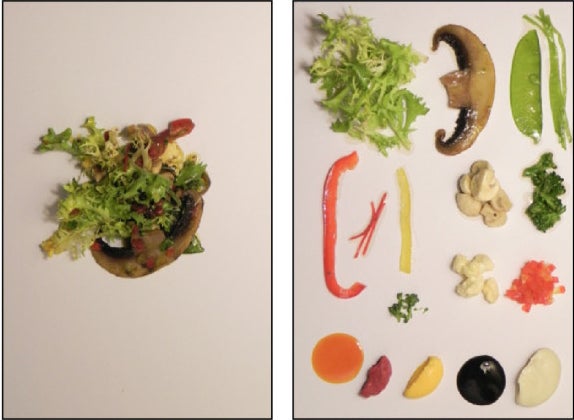 The regular salad on the left, the “neat” salad on the right. All salads contained the same ingredients, but diners strongly preferred the “Kandinsky” salad.
Science