The Next Tuna You Eat Could Have A Mackerel Momma 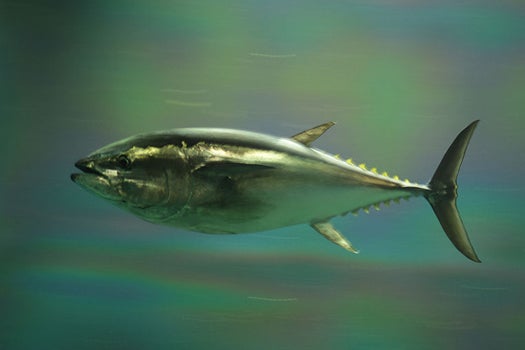 If you’re not worried about a future without toro sushi or rare tuna steaks, you probably should be. Five of the eight species of this tasty marine predator are endangered, according to the International Union for the Conservation of Nature, source of the Red List of threatened species. In January 2013 an international group of fisheries researchers told the world (PDF) that Pacific bluefin tuna had been fished to their lowest levels in history, with the population near to collapsing as a commercial stock.

This is a problem for natural ecosystems as well as for people who like to eat tuna (it is among the world’s most important commercial fish), and marine biologist Goro Yoshizaki is looking for a way around it. Nikkei Asian Review reports that the Tokyo University-based scientist is working to implant germ cells from young tuna into mackerel, and then use the mackerel to breed tuna:

Nikkei Asian Review states that Yoshizaki has selected mackerel to surrogate-breed tuna because “it grows quickly and does not cost much to raise.” Probably he had at least one more reason: they’re related. Both mackerel and tuna are in the family Scombridae. The baby tuna that result from this fishy form of IVF can then (presumably) have their germ cells transplanted into another set of surrogates, to start another generation while the tuna spend a few years growing.

Yoshizaki has had notable successes along these lines. Among the 350 scholarly articles that he’s co-authored, there’s a 2004 Nature paper on successfully breeding rainbow trout “via trout-donor germ cells transplanted into salmon” (both species are salmonids), as well as a 2012 paper in Marine Biotechnology on successfully breeding tiger puffer fish by transplanting their sperm and eggs into grass puffer fish.

His intriguing work may ensure an enduring supply of Pacific bluefin for Japanese and other cuisines. Still, it doesn’t answer the question of whether wild tuna will survive, or what marine ecosystems will lose if these apex predators are fished to commercial extinction.