The Mathematics Of Throwing A Curveball 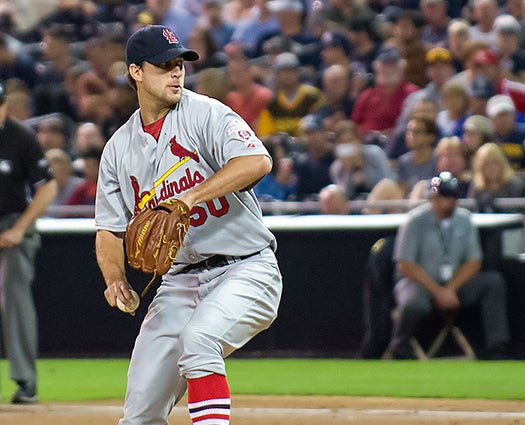 The World Series is happening right now, which means: computational fluid dynamics! The direction of, say, a curveball is essentially a physics problem: a pitcher applies forces to the ball, like top spin, then releases, and the result’s calculable if you put enough computer power behind it.

A team of researchers from Convergent Science, a company usually in the business of modeling systems like internal combustion engines, turned their attention to baseball after a series of friendly disagreements in the lunchroom over who would win the World Series. Cardinals pitcher Adam Wainwright turned out to be the perfect test subject: his curveball, as measured by the rate of batters he successfully causes to whiff, is one of the best in the game. By using modeling software, the Convergent team accurately modeled Wainwright’s pitch–a technique that could, at least in theory, be helpful in adjusting a pitcher’s throw for the optimal strike-rate.

Despite the complex math that’s happening under the computer’s hood (how good are you with Navier-Stokes equations?), it’s not too tough to explain the general idea. The Convergent software works through a process called “fluid structure interaction,” which, you guessed it, measures how an object interacts with a fluid. In the case of a pitch, that fluid is the air. Convergent adds to the equation the spin Wainwright puts on the ball. That includes the direction of the spin, like a totally vertical 12-6 (think: a clock’s hands), plus the amount of oomph he puts on it. The software predicts the ball’s path as it leaves the pitcher’s hand. More importantly, it accurately traces the path to the catcher.

Which, awesome, even if it doesn’t do much for_ _determining what a pitcher needs to perfect their change-up. “It was a good test case because it was something that we could verify: ‘Is this something we could answer?'” says Eric Pomraning, an engineer and owner of Convergent. The answer was yes, they could model the pitch, and the way the digital pitch twists and turns on its way to the catcher was the same way it did in reality. Could that be used to help pitchers?

With the model, the team might be able to monitor how wind affects the ball in certain stadiums, from which the pitcher could take a few pointers. But the experiment was done primarily for fun. They say they’ll try a spitball next.

And as for that lunchroom debate, they’re going to wait until the series is over to hash it out.