Map Maritime Treasures At The Bottom Of The Sea

Students help recast and preserve the history found in shipwrecks. 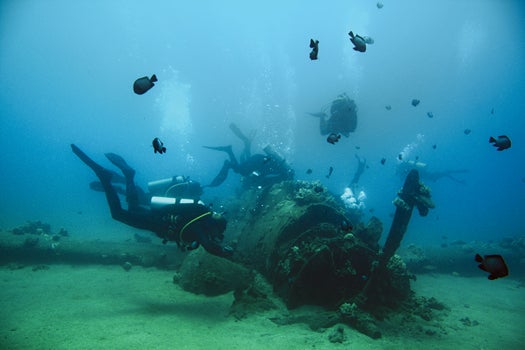 More than 150 confirmed wrecks lie deep beneath the waters surrounding the Hawaiian Islands. And since 1996, under-graduate students under the guidance of Hans Van Tilburg, a maritime archaeologist with the Office of National Marine Sanctuaries, have donned scuba gear to document these technological relics. “This is a way to survey cultural resources and tell part of the historical story,” Van Tilburg says.

Over the years, the University of Hawaii students have surveyed fighter planes, landing craft, and bomb-ers lost during World War II. This summer, they spent two weeks diving to a landing craft submerged near Pearl Harbor. The field course teaches them how to measure a wreck and the surrounding ocean floor using baseline trilateration, a mapping method that doesn’t require permanent grids. They also produce underwater drawings, photographs, and videos. The maps the students create will help state and federal agencies monitor the sites and protect them from looters, preserving their place in history.