Map-Making In The Brain Wins Nobel Prize In Medicine

Knowledge about how brains navigate through the world could help doctors understand what happens when Alzheimer's patients lose their ability to navigate.

Three scientists have won the Nobel Prize in medicine and physiology for their discoveries about how the brain builds a map of the world and navigates, the prize committee announced.

The discoveries pinpoint which brain cells people and other animals use to find their way around environments. Those are major questions about how life and biology work in general. “I think, without these cells, we would have a really hard time to survive,” Juleen Zierath, chair of the medicine prize committee, told the Associated Press.

This knowledge could also be the basis of understanding what happens in Alzheimer’s disease when people lose their ability to navigate, a dangerous symptom, the prize committee wrote in a statement. The very cells for which these scientists won the Nobel Prize are located in regions of the brain that are often affected in early-stage Alzheimer’s.

The prize-winners, John O’Keefe, May-Britt Moser, and Evard Moser, were responsible for finding two types of map-making cells in the brain. In the late 1960s, O’Keefe performed experiments that found “place cells” in lab rats. Place cells light up only when a rat is in certain places in a room. The cells store that rat’s memory of that room and the rat’s brain makes many maps for the many places it recalls. The cells appear in a part of the brain called the hippocampus. 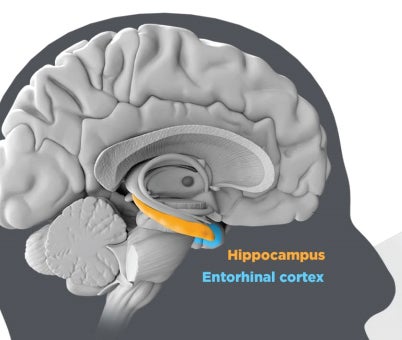 A generation later, the Mosers, who are married, discovered “grid cells,” which light up in regular spots in a room while a rat explores it. Grid cells create a kind of mental grid for the rat, even when it’s dark and the rat can’t see. Grid cells grow next door to the hippocampus, in a brain region called the entorhinal cortex.

Experiments have found that both lab rats and humans have place cells and grid cells, which suggests these map-making mechanisms evolved a very long time ago, when rats and people had a common ancestor. Thus, those mechanisms may be common among many mammals, which is pretty cool.

O’Keefe is a professor of cognitive neuroscience at the University College London and directs a neurology research center there. Both May-Britt Moser and Evard Moser are professors at the Norwegian University of Science and Technology and each direct their own research centers at the university. At one point, the Mosers studied under O’Keefe, the New York Times reports.