A Lick Of The Tongue Changes This Ice Cream’s Color

By the time you're done, it's like a whole new ice cream. 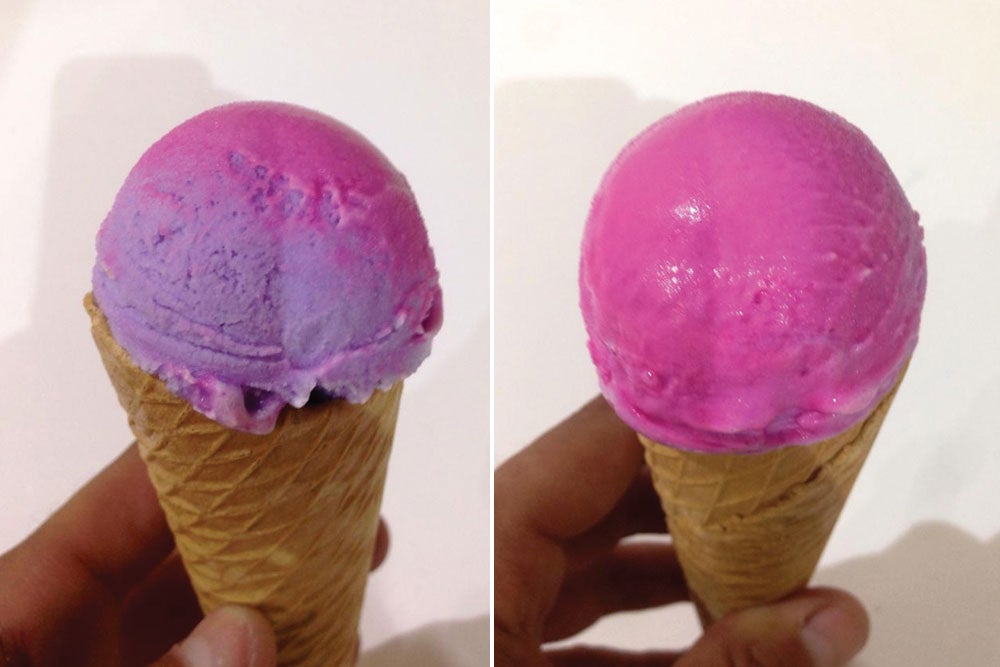 At first, it’s a delightful shade of periwinkle blue. Then, it turns into a lilac purple before settling on a vibrant magenta.

No, these aren’t the stages of your old mood ring. Believe it or not, this is the colorful transformation of the new ice cream Xamaleón, which is designed to change colors as you lick it.

The evolving dessert is the brainchild of Spanish physicist, engineer and professor Manuel Linares, who can now add “modern day Willy Wonka” to his resume. Inspired by the likes of Charlie Francis, creator of fluorescent ice, Linares said he wanted to create a kind of ice cream that had never been seen before.

The result was Xamaleón, which is Spanish for “chameleon.” With a patent pending, Linares is staying tight-lipped on the recipe, but apparently there’s a special ingredient dubbed the “love elixir,” which must be spritzed on the ice cream before it’s eaten. The mysterious concoction somehow reacts to your saliva and changes in temperature to transform the cream into its different delightful colors.

Linares claims the ice cream, which tastes like tutti-frutti, contains natural ingredients, such as strawberries, cocoa, almonds, bananas and more. At his ice cream parlor in Calella de Mar in Barcelona, business is through the roof, according to the Mirror.

And the former physicist isn’t stopping there. Phys.org notes he’s planning on making another ice cream called Xamán, which contains medicinal plants from Peru and Africa that produce an aphrodisiac effect. I think I’ll hold out for that flavor instead.