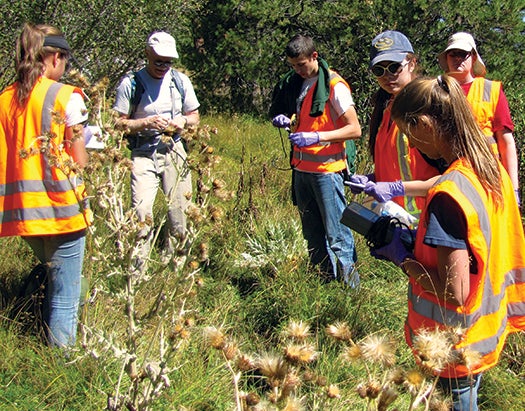 Mayson Trujillo stretches across a rock at the edge of a stream cascading through Lassen Volcanic National Park. Braving snow from an advancing blizzard, she meticulously collects a sample of the sulphur-scented water. Trujillo, a senior at Red Bluff High School in California, is intent on the task at hand: gathering data that may hold clues for early life on Earth—and potentially, Mars.

To reach the stream, Trujillo and 13 classmates snowshoed a mile into the center of an ancient volcano—for them, a routine field trip in a one-of-a-kind collaboration with NASA. The park’s mud pots and fumaroles can exceed 240˚F, too hot for most creatures but potentially habitable to the types of microbes that populated Earth 3.5 billion years ago. Understanding those conditions could help astrobiologists interpret signs of life on other planets, particularly Mars, where the Curiosity rover is scooping up soil. And the database of hydrothermal features the students have been building, based on sample analyses they do back at their high school lab, could guide future exploration of the Red Planet.

Dave Des Marais, a NASA geochemist who has been involved in Mars missions since the 1990s, started the Red Bluff program six years ago. He says the work being done by the students—possibly NASA’s only high school astrobiology interns—is sophisticated research, worthy of college juniors and seniors. By providing “real science in all its gory details,” Des Marais says, he hopes to develop a cadre of professional astrobiologists who will continue the search long after he and his colleagues are gone.

The class is no easy A. In fact, interns don’t even receive credit for their after-school commitment. But who else gets to have snowball fights with NASA scientists, asks Trujillo, as she seals her water sample into a sterile tube. “And it’d be so crazy if we actually find something out there on Mars,” she says, “even if it’s only a microbe.”