Simulating the atmosphere does more than just help students learn about the world. 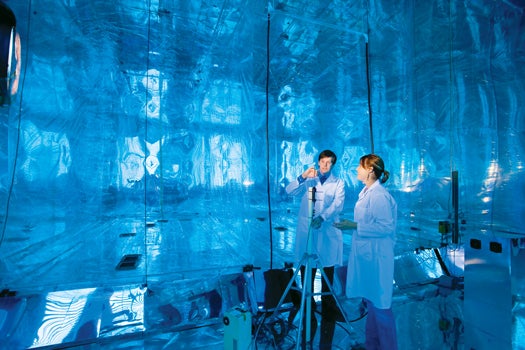 Led by atmospheric scientist Akua Asa-Awuku, the students inject aerosol-forming compounds and water vapor into the Teflon-lined, two-story-tall chamber. Black lights and a 200-kilowatt Argon arc lamp simulate the sun; factors like temperature, pressure, humidity, and heat can be altered to mimic various conditions. More than 30 instruments—many built by students—help measure the aerosols’ chemical and physical characteristics as they attract water to form cloud droplets.

Because aerosols are the greatest source of uncertainty in climate models, the findings may refine our understanding of climate change. Other college students, meanwhile, use the lab to study air quality, generating data that helps set federal and state emissions standards.

38: percentage of freshmen at four-year universities who planned to major in a science or engineering field in 2010