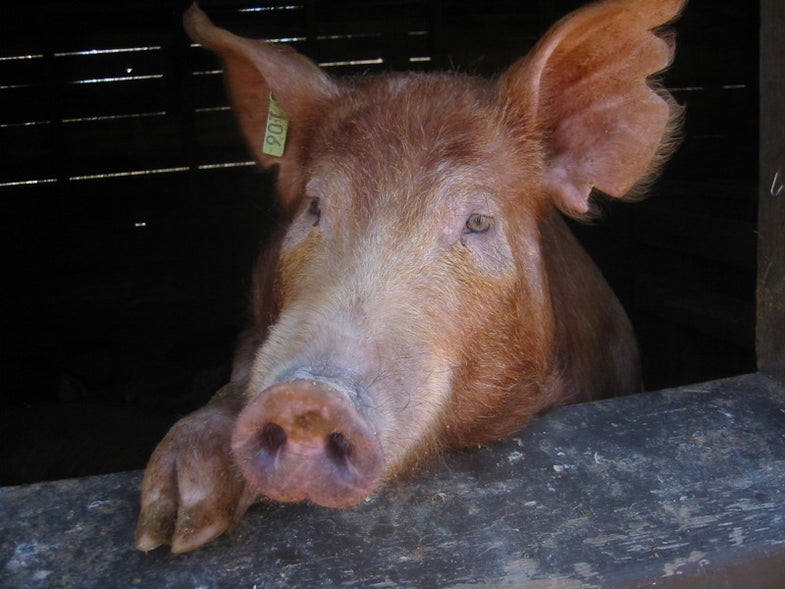 There are no genetically engineered animals sold for human consumption right now. The only candidate that’s anywhere close, AquaBounty’s fast-growing GM salmon, seems to have stalled in its approval process, in spite of positive scientific reviews finding AquaBounty fish safe to eat and safe for the environment. As you might guess, the lack of genetically modified meat on the market isn’t because of a lack of technology. It’s because of politics—GM foods are deeply unpopular, and GM food animals especially so.

Still, I was surprised at how far along the development of GM meat is after I read this new feature from the biologists’ magazine The Scientist. There are many labs around the world working on making animals that are engineered to grow faster, resist disease, or provide people with extra nutrients. Research projects underway include goats whose milk is designed to prevent deadly diarrhea in children and chickens in which bird flu viruses don’t reproduce. In spite of public opposition and a lack of funding, GM meat research has continued to advance.

With new tools, some scientists are hoping they can engineer animals that are more appealing to the public.

One major trend: Scientists have developed incredibly precise techniques for genetic engineering. For example, they’re now able to change just one base pair in an animal’s DNA code—one pair of letters in an animal that has billions of such pairs. Needle, haystack, etc., etc.

With these new tools, some are hoping they can engineer animals that are more appealing to the public. How? They’re making animals whose genes are similar to those found in closely related, unmodified animals. So, instead of giving pigs mouse genes, scientists could make domestic pigs with genes normally found in wild pigs. The end result would be engineered pigs that farmers could have made through generations of careful breeding, geneticists argue. Science just zooms to the final result faster.

Have these scientists never read the comments on an article about GMOs/been on Facebook? I don’t think those who don’t wish to eat GM foods will find GM pigs-with-pig-genes any better than pigs with mouse genes. But hope springs eternal among genetic engineers, apparently.

However you may feel about genetically modified foods, we thought you would enjoy this foray into the science of it all. Check out The Scientist for more.