How Long Could You Survive In A Coffin If You Were Buried Alive?

It depends on how big your coffin is. 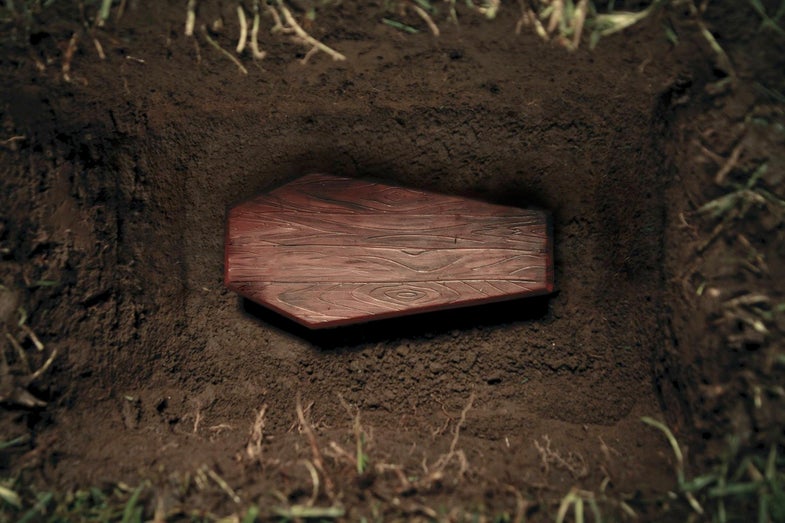 A normal, healthy person might have 10 minutes to an hour, or six hours to 36 hours–depending on whom you ask–before settling into a premature grave. Scientists disagree, but one thing’s for sure: it wouldn’t be long.

It all comes down to the amount of air available in the coffin itself. The smaller you are, the longer you’ll survive, because you take up less space, which means more room for oxygen. The moment your oxygen supply is gone spells the end. Swimmers or marathon runners with excellent lung capacity might gain an extra minute by holding their breaths.

The smaller you are, the longer you’ll survive.

Let’s say the average casket measures 84 by 28 by 23 inches, so its total volume is 54.096 cubic inches, or 886 liters. We’ll use that as the internal volume too, to give you a few extra minutes of life. And the average volume of a human body is 66 liters. That leaves 820 liters of air, one-fifth of which (164 liters) is oxygen. If a trapped person consumes 0.5 liters of oxygen per minute, it would take almost 5 and a half hours before all the oxygen in the coffin was consumed.

“There’s nothing someone [buried alive] could do. Once you’re in there, you’re in there,” says Alan R. Leff, professor emeritus at University of Chicago in the pulmonary and critical care department. That’s because the coffin is probably well-sealed, not to mention buried under 6 feet of soil.

Even if you were able to get out of the coffin without exhausting your air supply first, you’d find yourself in a situation similar to being buried in a mega-landslide or avalanche. The dirt would be so dense and heavy that your chest wouldn’t be able to expand. “It’d be like concrete setting in the course of seconds,” says Ethan Greene, Director of the Colorado Avalanche Information Center. Snow is heavy, but earth is even heavier. And if you were able to move, the dirt would fall into your mouth or nostrils and could end up clogging your airways.

But there is one upside. As the carbon dioxide builds up it would make you sleepy and you’d eventually fall into a coma before your heart stopped and the rest of your body followed.

“You might feel the suffocation, and it would obviously be terrifying,” Leff says, but at the very least, you wouldn’t be conscious during those last moments.

Ask Us Anything
Science